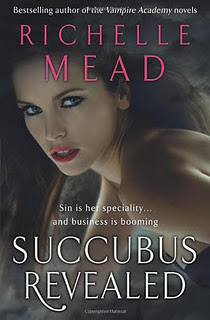 Georgina Kincaid has had an eternity to figure out the opposite sex, but sometimes they still surprise her.

Take Seth Mortensen.  The man has risked his soul to become Georgina's boyfriend.  But with Lucifer for a boss, Georgina can't just hang up her killer heels and settle down to domestic bliss.  In fact, she's being forced to transfer operations . . . to Las Vegas.

The City of Sin is a dream gig for a succubus, but Georgina's allies are suspicious.  Why are the powers-that-be so eager to get her away from Seattle - and from Seth?  Georgina is one of Hell's most valuable assets, but if there's any way out of the succubus business she plans to take it - no matter how much roadkill she leaves behind.

She just hopes the casualties won't include the one man she's risking everything for . . .

Review:
Finally Georgina and Seth are back together, everything should be going really well for them but for some reason Hell seems determined to keep them apart.  Georgina is being transferred to Las Vegas, she will be working with some of her favourite colleagues and have her dream day job.  Sounds perfect doesn't it?  But with Seth having to remain in Seattle to help his family Georgina and her friends have their suspicions that the transfer is too good to be true.  Just what is Hell up to?

As much as I was looking forward to reading Succubus Revealed I was also disappointed to have reached the end of the series.  I've really loved Georgina and her crazy group of friends so am sad to say goodbye to them all.  I have to say that it is nice to see a series end on a high note though and Richelle Mead has certainly achieved that with Succubus Revealed.

Before I even picked up the book I had a good idea of where the story was heading, well where I wanted it to go anyway, and I have to say I was extremely satisfied with how things turned out.  Even though I had guessed the main ending there were actually a couple of things that surprised me along the way (particularly a revelation about Seth and Roman's actions towards the end but I can't say more than that without spoilers).  The last book in the series is an emotional roller coaster ride and one I thoroughly enjoyed, I know this is a series I'll end up coming back to in the future and it's one I would highly recommend to urban fantasy fans.  I'm looking forward to seeing what Richelle Mead comes up with next (please let it be a spin off featuring some of the characters from this series - I'd love to see more of Roman and the gang!)