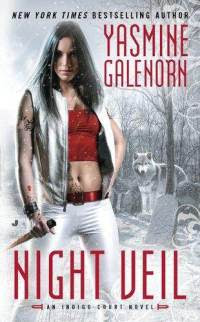 Eons ago, vampires tried to turn the dark Fae in order to harness their magic, only to create a demonic enemy more powerful than they could have imagined.  Led by Myst, Queen of the Indigo Court the Vampiric Fae have been quietly amassing their strength for centuries.  Now they are determined to enslave the world, and only one witch stands in their way . . .

Cicely Waters grew up believing she was simply one of the magic-born - a witch who can control the wind - but when she returned home to New Forest, Washington, she discovered she was also one of the shifting Fae.  Now she must perfect her gift.  For Myst has captured Grieve, the Fae Prince who holds Cicely's heart.  To save both her beloved Grieve and her friend Kaylin - whose demon is waking - Cicely must journey to the depths of the Indigo Court.

But even as Cicely gathers strength, old alliances are breaking faith.  And new allies, like the hedonistic vampire Lannon Altos, promise to take Cicely down a far darker path than she's ever traveled before.

Review:
Night Veil picks up the story just a few days after the ending of Night Myst and is another great installment in Yasmine Galenorn's Indigo Court series.  This is a series that I would suggest reading in order & this review will probably include slight spoilers for the first book so if you haven't read it yet then I wouldn't recommend reading any further.

Cicely and her friends are preparing for war against the Vampiric Fae and Cicely is determined to rescue her soul mate Grieve from Myst's clutches.  The dangers are great and Cicely knows that the vampires and fae who claim to be her allies have their own agendas and are happy to use her to get what they want.  What she is having trouble figuring out is how to stop being caught in the middle and becoming collateral damage along the way.  With friends becoming enemies and enemies behaving like friends it is impossible for her to know who can be trusted.  Can she find a way to rescue Grieve or has he been lost to her forever?

Night Veil is a fast paced story and there were plenty of twists and turns that shocked me along the way.  I think the story was a little less dark than the first one (there were less scenes with Lannon taking advantage of Cicely for example) but that isn't necessarily a bad thing and there is still a lot of action.  Cicely is growing into her new abilities, she is still protective of those she cares about and she takes a lot of responsibility on her shoulders to try and keep everyone safe.  We learn more about her past life with Grieve and see why their connection is so strong and we also find out more about why Myst is so keen to destroy Cicely and her friends.  There are some shocking betrayals along with a few surprising alliances forming and I'll be really interested to see how this plays out in the next book.

It was good to get to know the side characters better - I love Cicely's cousin Rhiannon and am pleased to see her harnessing her powers, I'm curious about how the changes in Kaylin will affect him in the future and I'm looking forward to finding out more about Luna.  I still don't feel like I know Grieve well enough to have fallen for him but it was good to discover more about his past and I'm hoping he'll have a larger role to play as the series continues.

If you enjoyed Night Myst you'll like Night Veil even more, some loose ends are tied up and although the story doesn't end on a major cliffhanger it sets things up well for the next book - Night Seeker.  I'd definitely recommend the series to urban fantasy fans and am looking forward to getting my hands on the next installment.