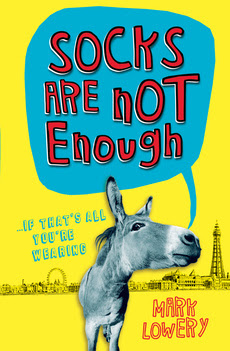 Think being a teenager is bad? Well – poor Mike Swarbrick’s life couldn’t get any worse! His best friend has tugged him into a scandal involving the girls’ changing rooms. His creepy older brother is snogging the girl of his dreams… AND he’s just come home early from school to discover that his parents are secret nudists who (shudder) are planning to go public! Surely even an idiot could see that Mike is the victim in all this. But instead, his teachers think HE’S having trouble ‘dealing with his feelings’! Before he knows it, Mike is being forced to meet with the school counsellor. And so begin Mike’s ‘Chats with Chas’, which really are as humiliating and cringe-worthy as they sound…

Guaranteed to leave you chortling, cringing and choking on your tea and biscuits, this off-the-wall tale of first love, donkeys and nudity takes teen fiction into a whole new dimension.

Review:
Socks Are Not Enough is a hilarious debut from Mark Lowery and one that I'd recommend to fans of Adrian Mole or the more recent One Seriously Messed-Up Week in the Otherwise Mundane and Uneventful Life of Jack Samsonite by Tom Clempson.

14 year old Michael's life is turned upside down the day he comes home early and discovers that his parents are secret nudists.  As if the shock of seeing his parents naked wasn't bad enough they've now decided that they want to go out in public.  To make matters even worse everyone seems to think that Michael is the one with the problem so he gets to spend his afternoons with the school counsellor to talk about his feelings.

Michael is a fab main character although I have to wonder from his slightly stilted way of speaking if he was slightly autistic.  If not autistic then I'd definitely say he has OCD tendencies, he has very set routines and gets very unsettled when things change and he really doesn't like to be looked at or touched.  He tells his story part in diary style entries that his counsellor gets him to write and partly through the transcripts of his counselling sessions.  I love the way he is constantly creating lists and adding footnotes to his writing to include extra information.  You can't help but connect to Michael as he copes with the embarrassment his parents cause him and deals with the fallout from his brother's actions.  He really does end up managing to get himself into some awkward situations that take a lot of explaining.

Socks Are Not Enough is a fun, fast read and one that's guaranteed to have you laughing out loud.  I can't wait to see what Mark Lowery comes up with next and I hope we get to see more of Michael and his antics in the future.