Review: We Can Be Heroes - Catherine Bruton 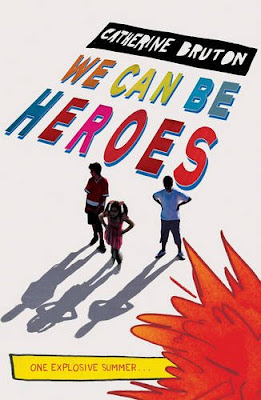 My dad was killed in the 9/11 attacks in New York. But the stuff in this book isn’t about that. It’s about the summer me and Jed and Priti tried to catch a suicide bomber and started a riot.

There’s stuff about how we built a tree house and joined the bomb squad; how I found my dad and Jed lost his; and how we both lost our mums then found them again.

So it’s not really about 9/11 but then again none of those things would have happened if it hadn’t been for that day.

Review:
We Can Be Heroes is an impressive debut from Catherine Bruton and I'm looking forward to seeing what she comes up with next.  The story tackles difficult subjects such as racism, gang crime, grief, family separations and mental health issues but it does so in a way that is both humorous and informative.

The story is told through the eyes of 12 year old Ben and he is a great narrator with a fun way of looking at the world - I loved the way he was constantly picturing speech bubbles over people's heads.  Ben's father was killed in the 9/11 terror attacks and Ben can barely remember him, his mother has struggled to cope ever since and Ben is sent to live with his grandparents for the summer while his mother is in hospital.  Ben's cousin Jed is also staying with his grandparents for the summer while his own parents fight a battle over custody after a messy divorce.  Together the two boys befriend their neighbour Priti, a young Muslim girl whose family recently moved to the neighbourhood.

Watching the three friends together will take you back to your own childhood - to the good old days of climbing trees, wheelie shoes (well roller skates in my day!) and making up stories.  To happy and carefree summers when you didn't realise how good life was.  Although life for Ben, Jed and Priti is far from perfect - they all have their own issues to deal with.  You can't help but laugh at their antics though and I read the story surprisingly quickly considering it has nearly 500 pages.

I have to give Catherine Bruton credit for tackling such difficult subjects in a sensitive way and at the same time making it accessible for people of all ages - this story really will have something in it to appeal to everyone from the age of 11 to 111.  We Can Be Heroes is a book that will make you think, it gives real insight into racism in the UK today and will hopefully challenge some people's opinions about what is right and wrong.  I'd highly recommend this book to anyone who wants a book that is fun but thought provoking.