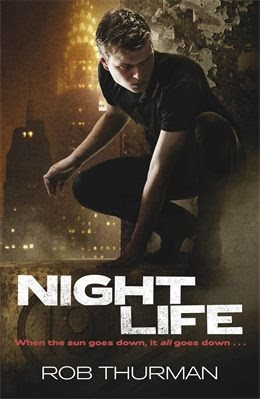 'There are monsters among us.  There always have been and there always will be.  I've known that since I can remember, just like I've always known that I was one . . . Well, half of one anyway.'

Cal Leandros is nineteen.  He eats junk food, he doesn't clean up after himself and he fights with his half brother Niko.  It's a fairly normal life, but for the fact that Cal and Niko are constantly on the run.  Cal's father has been after him for the last four years.  And given that he's a monster whose dark lineage is the stuff of nightmares they really don't want him and his entire otherworldly race catching up with them.  But Cal is about to learn why they want him, why they've always wanted him: he is the key to unleashing their hell on earth.

Meanwhile the bright lights of the Big Apple shine on, oblivious to the fact that the fate of the human world will be decided in the fight of Cal and Niko's lives . . .

Review:
Cal and his half brother Niko have been on the run for four years.  Cal's father is a Grendel (well that's the name the brothers have given the monsters but I think you'll be surprised when you find out what they really are!) and the Grendels have taken a keen interest in him but the brothers don't know why.  Niko is determined to protect his younger brother but it appears that the Gendels have finally caught up with them - can they survive the upcoming battle?

Nightlife has been on my radar for sometime now after hearing about the series from several US bloggers but I'd never quite got around to ordering a US copy.  When I found out the series is finally being released in the UK I jumped at the chance to read it.  I'm glad that I did and I'm pleased that we don't have too long to wait until the rest of the series will be published over here too (the next 3 books will all be available from Berkley UK in 2012).

I haven't read much urban fantasy told from a male perspective before so that made a nice change for me.  Cal is a great narrator and I loved his sarcastic sense of humor and the relationship between him and Niko.  I have to admit the narration change towards the end of the book threw me for a few pages but it worked well and was a clever way for the author to tell us more about Cal's background and the grendels.  I preferred the parts from Cal's point of view though so am glad that it switches back to him at the end.

At 19 years old Cal is a pretty typical teenager in most ways, he does act a little younger than his age at times but that is understandable considering his missing two years (I'm not going to explain that further for fear of spoilers but you'll know what I mean if you read the book).  Cal can be quite lazy, he loves sleep and he loves his junk food, he also has a smart mouth that often gets him into trouble but he uses humor as a weapon because of his insecurities.  All of his life he has been told by his mother that he is a monster, the only person who has ever loved and cared for him is his brother but knowing who his father is makes Cal terrified that he really is evil.  Niko sees the real Cal though and has spent years protecting him and trying to build Cal's confidence in himself.  I loved the banter between the two of them, they act like typical brothers - often arguing but the first to jump to each others defence.  I'm looking forward to seeing more of them together as the series continues.

The world building is strong and Rob Thurman has put some interesting twists on creatures that we think we already know.  Along with the standard creatures you come across in paranormal stories there are a few thrown in that I've not really seen much of before which makes a nice change.  I'm interested to find out more about Robin, Georgina, Rafferty and Catcher - it's always good when a series has a strong cast of side characters.  Nightlife was a great start to the series and I'm looking forward to seeing where the story takes us in the next installment.

Source: Received from Berkley UK in exchange for an honest review