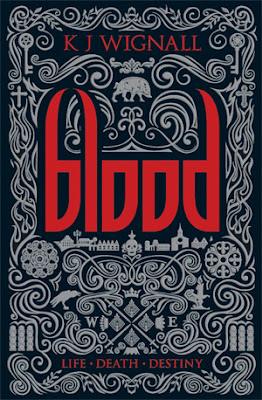 I do not remember being bitten.  I wish I did, for then I would know the creature who did this to me and I would have a purpose, to track him down and repay him for the poisoned gift he gave me.

Will was once destined to be Earl of Mercia, although he never lived to inherit his title, struck down by a strange sickness at the age of sixteen.  Yet despite his death - and burial - Will is far from dead.

His is a lonely life, a never-ending cycle of dealing with whatever the present day throws at him, always searching for answers to his existence, but never finding any before the long sleep claims him again.

This time Will's destiny awaits, but so do his enemies.  After centuries of solitude, his fate is close at hand, but it is not something that he can face alone . . .

Review:
Will has been a vampire for over 750 years, he has no idea who gave him this curse and he has never met another of his kind.  He should have become the Earl of Mercia but was changed before he inherited his title. Will has just woken up from a long period of hibernation and is once again searching for answers, this time, after finding a prophecy it appears he might finally be close to discovering his destiny.

What I really liked about this book is that we're getting back to the more traditional kind of vampires, Will isn't completely evil but he makes no appologies for having to kill people to survive.  He isn't constantly murdering people and can in fact go for long periods without blood but when he wakes from hibernation he must drain a victim.  It makes a nice change from the vampires we've been seeing a lot of in YA fiction recently - the ones that drink animal blood or only drink small amounts from willing victims.

Will is a lonely character and it becomes easy to feel for him, he never asked for his curse and having never met the person who changed him he has struggled to learn about his condition.  He has known a lot of loss throughout the years and is wary of getting close to anyone because he knows they will eventually die and leave him alone again.  I loved the chapters where you find out more about his past and felt the diary entry feel to them worked really well.

I have to admit I wasn't so keen on Eloise though, we didn't really find out enough about her for me to be able to relate to her in any way but I'm hoping that changes as the series continues.  The main story focuses on the mystery of why Will was changed and who changed him which is something I'm really enjoying and looking forward to finding out more about.  Although there is a little romance it takes a backseat to the main story which was fine but I didn't find it believable.  Eloise was far too quick to accept that Will is a vampire, she knows he murdered his last victim but doesn't really show any fear of him which surprised me.  I was even more surprised that she tries to kiss him so soon after meeting him and even asks him to change her into a vampire.

Overall I still enjoyed the story but I'm much more interested in finding out why Will was changed and how the prophecy will play out than I am in the possible romance.  That isn't a bad thing, I don't need romance in every book I read, and I hope that the focus of the series continues in the same direction.

Source: Received in a goodie bag at an event at Foyles