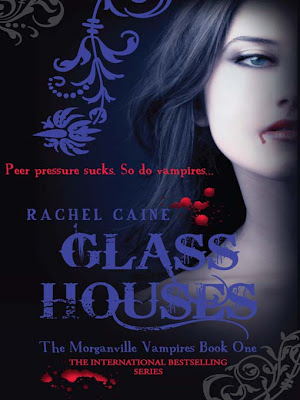 Welcome to Morganville.
Just don't stay out after dark.

Morganville is a small town filled with unusual characters - when the sun goes down, the bad come out.  In Morganville, there is an evil that lurks in the darkest shadows - one that will spill out into the bright light of day.

For Claire Danvers, high school was hell, but college may be murder.  It was bad enough that she got on the wrong side of Monica, the meanest of the school's mean girls, but now she's got three new roommates, who all have secrets of their own.  And the biggest secret of all isn't really a secret, except from Claire: Morganville is run by vampires, and they are hungry for fresh blood...

Review:
Claire is only 16 but she is incredibly smart and has skipped two years at school to start college early.  But being the youngest student at college isn't easy - especially when she manages to get on the wrong side of the meanest girls on campus, Monica and her followers.  After a vicious attack leaves Claire injured and terrified of what the bullies might do next she feels she has no choice but to try and move off campus to avoid them.  Luckily she meets Eve and finds out about a spare room at Glass House where Eve lives with her friends Michael and Shane.  What she doesn't realise is how powerful Monica and her gang is and that Morganville is under control of something even worse.

I'm a massive fan of Rachel Caine's Weather Warden series and have heard nothing but good things about her Morganville books so I'm really not sure why it's taken me so long to get around to starting them.  I'm glad I finally did though because Glass Houses is a great start to the series and I'm looking forward to reading more.  In a way I'm glad that I'm so late to the Morganville party - it just means no long wait for the next book in the series!

Claire is very young and innocent and she can come across as quite naive at times.  I was worried at the beginning because she starts out quite weak but that just made me all the more proud of her when she finally started to stand up for herself.  She still isn't the strongest character but she is getting there and her confidence grows throughout the story.  The bullying in the story is extreme, I thought I had it bad at school but what I went through is nothing compared to what happens to Claire.  Although there are vampires in the story (and they aren't pleasant vampires by any means), the worst bullying comes from other humans which I found refreshing in a paranormal story.  It was also realistic - I think we all know just how evil some teenage girls can be!

I really liked Claire's roommates, you have Eve who is much stronger than Claire and more prepared to fight for what she believes in.  Then there is Michael who is the owner of the house, he is the most mysterious character and it is obvious from early on that he is keeping secrets but I wasn't expecting the revelation about him.  Michael is the one that looks after everybody else, he has been friends with Shane for years but takes in Eve and Claire just because he is worried for their safety.  Finally you have Shane who was probably my favourite of the bunch, he is a bit of a player but he has a strong protective streak.  As you find out more about his past it is easy to see why he feels so determined to keep his friends safe.

The plot moves along at a good pace, there are a few good twists and there is a killer cliffhanger (see it's a good thing I already have the next 8 books sitting on my shelves!) so overall this is a book I'd recommend to fans of young adult urban fantasy.  Now I'm off to get started on my copy of The Dead Girl's Dance!