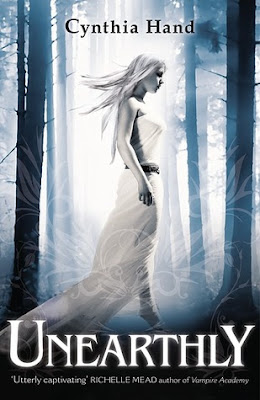 In the beginning, there's a boy standing in the trees.  I take a step toward him, open my mouth to call his name, only I don't know it.  Then he starts to turn.  That's when the vision leaves me.  I blink, and it's gone.

Clara is part-angel.  Through terrifying visions of a forest fire she is shown her purpose: to save a beautiful, unknown boy.  When she finds Christian, the boy from her visions, he's everything she could wish for.  But Clara discovers there's a darker side to her purpose.  And if Christian is so perfect, why does she have feelings for someone else?

A mesmerising story of destiny, supernatural powers, forbidden romance and an impossible choice.

Unearthly Series:
Unearthly
Hallowed
Radiant (Novella)
Boundless (This has already been released in the US but there is currently no UK release date)

Review:
I'm not always the biggest fan of books about angels so although I'd heard good things about Unearthly I have to admit I was wary about reading it.  I was pleasantly surprised though and have to say that this is definitely one of the better angel stories that I've read.  Cynthia Hand has come up with a mythology that is different from any other that I've read and I'm really interested in finding out more as the series progresses.

Clara has known for several years that she is part angel but she has only just started having visions about her purpose.  At the beginning of the book Clara's family have to move from California to Jackson Hole to be near the location seen in Clara's visions.  Her purpose is only revealed in small glimpses though and Clara must try to figure out exactly what it is that she is supposed to do.  At her new school she recognises Christian as the boy from her visions and is immediately drawn to him knowing that their futures will collide.  But if she is meant to be with Christian why does she find herself being attracted to Tucker?  How can she choose one over the other and can she succeed in her purpose?

Clara was a likable character and I really enjoyed the family dynamics with her, her mother and her brother Jeffrey.  It was nice to read a story where the whole family are aware of, and involved in, the supernatural world.  Clara's mother has been open with both of her children about the fact that they are part angels but she wasn't as forthcoming with information about their purpose or the rules they must live by.  I found myself getting irritated with the way she kept so many secrets but you eventually see that she is trying to protect them both.  Things could have been much easier if she had been more honest though!

I have to admit that I wasn't that invested in the love triangle.  There was only one possible outcome from the very beginning as far as I was concerned.  I was annoyed with Clara that she convinced herself that she was meant to be with Christian just because he was the boy in her vision.  There was nothing about Christian that made him stand out as a character to swoon over.  I was much more interested in Tucker the gorgeous cowboy (I've said before that we need more hot cowboys in YA & am glad I've found another one!).  We get to see a lot more of Tucker and he is sweet, caring and oh so swoon worthy!  What I liked most was the way Clara and Tucker slowly get to know each other becoming friends first and then gradually moving on to something more, it makes a refreshing change from the usual instant love you often find in paranormal stories.

Unearthly is a beautifully written debut, the story starts slowly but builds to an action packed finale that leaves you desperate to get your hands on the next installment.  Cynthia Hand is definitely an author to watch out for and I can't wait to pick up Hallowed when it comes out next year.

Source: I was given this book by Kirsty from The Overflowing Library.