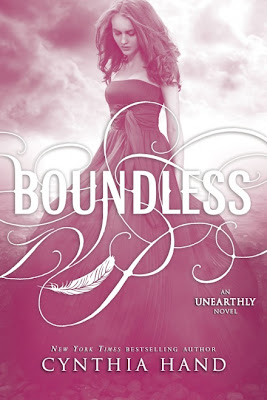 The past few years held more surprises than part-angel Clara Gardner ever could have anticipated. Yet through the dizzying high of first love to the agonizing low of losing someone close to her, the one thing she could no longer deny was that she was never meant to have a normal life.

Since discovering the special role she plays among the other angel-bloods, Clara has been determined to protect Tucker Avery from the evil that follows her . . . even if it means breaking both their hearts. Leaving town seemed like the best option, so she's headed back to California—and so is Christian Prescott, the irresistible boy from the vision that started her on this journey in the first place.

As Clara makes her way in a world that is frighteningly new, she discovers that the fallen angel who attacked her is watching her every move. And he's not the only one. . . . With the battle against the Black Wings looming, Clara knows she must finally fulfill her destiny. But it won't come without sacrifices and betrayal.

In the riveting finale of the Unearthly series, Clara must choose her fate once and for all.

Unearthly Series:
Unearthly
Hallowed
Radiant (Novella)
Boundless (This has been released in the US but there is currently no UK release date)

Review:
I really enjoyed Unearthly and Hallowed and it feels like I've been waiting forever to get my hands on Boundless so I was horrified when I found out that it wasn't being published in the UK. Thankfully a very good friend send me the US version so although I'm very disappointed that the books won't match sitting on my shelves I'm very grateful that I got to find out how the trilogy ends. I want to say to anyone who is put off by the cost of buying the US hardback just go for it - if you enjoyed the first 2 books you're going to love this one. I really did think it was the best instalment of the series and I'm so happy with how Cynthia Hand tied everything together.

It is so hard to review this book because I don't want to give any spoilers regarding the outcome. Anyone who has read my reviews for the first 2 books will know that I was crazy about Tucker from the very beginning but Christian had really started to grow on me in the 2nd book and I was dying to know who Clara would eventually pick. I'm not going to give you the answer to that question though so you'll have to read the book to find out. What I will say is that I went into this book hoping for one thing and then as I was reading my mind changed back and forth between the two boys so many times that I ended up completely unsure which choice Clara should make. I got to the point where I could see the logic behind either choice and I was torn over whether she should go with her head or her heart. The only other thing I can say is that I think when it came down to it Clara made the only decision she could have and things ended the way they were meant to.

When it comes to the story line I have to admit that I was a little frustrated at times because we didn't see as much of Tucker as I wanted to but then the moments where he was on the page were just so perfect that I can't complain too much. I already said I grew to really like Christian in the second book but I think I grew to respect him even more in this one for the way he stood by Clara no matter what. Clara is such a fantastic character and one I've been happy to route for since the beginning, she has had to cope with a lot throughout the series but she tries so hard to do what is right and what is best for those around her. She is the kind of person who is willing to go out on a limb for those she cares about, her protective instincts are great and even when a decision hurts her she will stick to it if it means keeping someone else safe. I do think I might have missed out by not reading the Radiant novella before starting Boundless though. I'm pretty sure that would have given me a lot more background information about Angela's story and I'm kind of kicking myself for not reading it first but overall I didn't have any problems following the events in Boundless because I hadn't read it. Things that happened with Angela really shocked me but I may have been less surprised if I'd read Radiant first. I had been really worried about Jeffrey after the events in Hallowed so it was good to see how he was getting on and watch him start to rebuild his relationship with Clara.

I really don't want to say more about what happens in the book because I think you should know as little as possible before reading it to get the full enjoyment out of every single revelation. I'm just going to leave it by saying that Boundless is a fabulous end to the series that was full of action, drama, betrayal, love, hope and laughter. It's an emotional roller coaster that made me cry my eyes out while I was reading but left me with a huge smile on my face by the time I reached the end. One thing I would beg Cynthia Hand for would be a book (or even a novella) about the guy that Clara didn't choose, I really would love to see him get his own happy ending. If you're a fan of this series then Boundless is a must read book and I think no matter which team you were on you'll reach the end knowing that Clara made the right choice.

Source: Gift from a friend