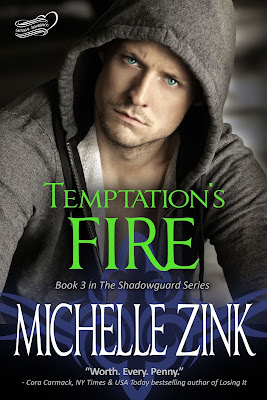 Maggie O’ Reilly has her hands full. It’s all she can do to hold down her job at small-town newspaper and pay the nursing home bills for her deteriorating father. But a lead on a story from Ivan Montgomery might be just the thing to win her the promotion -- and raise -- she needs to secure her father’s care.

Ivan Montgomery isn’t exactly Mr. Popular. As the son of Ambrose Montgomery, head of the Shadowguard, Ivan has a reputation for being surly and confrontational. But somehow Maggie’s spirit and vulnerability make him want to be a better man.

Too bad a future between them is impossible.

As an outsider, Maggie can never know that Shadowguard Security is a front for the Alliance, a group of angelic descendants who keep mankind balanced between the forces of light and dark. And that means she can never know who -- and what -- Ivan really is.

But as the pair come closer to solving the mystery of who is framing the Shadowguard for murder, their attraction becomes impossible to deny. When a confrontation with a deadly foe forces them to face their feelings -- and their passion-- they will have to answer the question; can true love survive the ultimate secret?


Here, There and Everywhere
by Michelle Zink

I’ve always been a “place” person. Even in real life, there are certain places to which I feel an instant connect. New York was like that. I’d lived in eight states by the time I visited New York for the first time, taking a week to drive the Hudson River Valley and stay in B&Bs. We arrived in Albany close to midnight. Too dark to see anything, we went straight to our hotel and crashed.

But the next morning as we drove south, I could hardly believe my eyes. It was the first week of October. The trees glowed orange and yellow and red, the sky a deep blue I’ve since come to think of it as October Blue, because it only seems to be that color for a fleeting few weeks in the fall.

Anyway, I felt an immediate, visceral connection to New York. In some strange way, I felt that I was meant to be here, maybe even that I’d been here before in some other time or place. It was the first place I’d been where I could clearly see it the way it must have looked before man came along to spoil it.

So I guess it’s no surprise that I spend a lot of time considering location for my books. Prophecy of the Sisters was set in upstate New York, in a town very like the one I live in. And while it’s set in the Victorian era, there are certain things that never change; the way the fog lays low in the valleys, the sound of the wind moving through an old house, it’s beams creaking like old bones, the ageless feel of the woods when you stop to be still just for a moment.

I chose England and Ireland for the next two books in the Prophecy series. Both places lent an eerie, primeval atmosphere to the story, and to this day I’m sure that is a big part of the series' ability to transport readers to another place and time. My next book, THIS WICKED GAME (November 2013) is about voodoo and is set in New Orleans. One of my favorites!

But the Shadowguard series is different. Set modern day with a contemporary cast of twenty-something characters, it’s a dark, edgy series complete with danger, smokin’ hot guys, and plenty of sexytimes. In thinking about the right setting, I didn’t have to look far.

Middletown, NY -- my inspiration for Clifton -- was once a thriving city with an extensive network of railroad stations. Now it’s a strange mix of faded grandeur, attempted revitalization, and crumbling train depots. It features both strip malls and an old move theater, complete with its original organ and an ongoing old movie line-up. There are pawn shops and a shopping mall, small Mexican markets and an Applebees, dive bars and a Panera. It’s a town that looks one way during the day and another after dark -- kind of like the Shadowguard.

I hope readers find that the setting adds to their enjoyment of the series. I hope they can imagine themselves at the Anti-Chamber, having a beer with Scarlet and Rowen while they keep an eye on the Legion. I hope they can see themselves walking to the farmer’s market in the old depot parking lot with Kane and Lily, stopping for ice cream at the park on the way home. Maybe they’ll even have dinner at a little bistro with Ivan and Maggie. Whatever they see, I hope the series gives them an escape from everyday life -- and a glimpse into an entirely new world.

Thanks for a fabulous guest post Michelle, I always love finding out where authors get the inspiration for their stories and how they create the worlds their characters live in.

If you haven't started reading the Shadowguard series yet then it's one I'd highly recommend for when you're looking for a quick, sexy and action packed novella to read. I really enjoyed the first two stories and can't wait to see how things end in Temptation's Fire!
at 12:00