Review: Ride with Me - Ruthie Knox 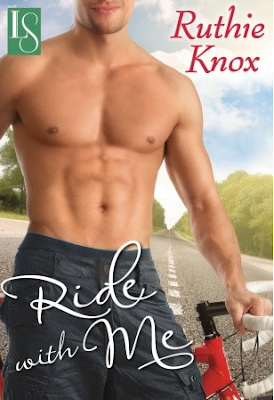 When Lexie Marshall places an ad for a cycling companion, she hopes to find someone friendly and fun to cross the TransAmerica Trail with. Instead, she gets Tom Geiger-a lean, sexy loner whose bad attitude threatens to spoil the adventure she's spent years planning.

Roped into the cycling equivalent of a blind date by his sister, Tom doesn't want to ride with a chatty, go-by-the-map kind of woman, and he certainly doesn't want to want her. Too bad the sight of Lexie with a bike between her thighs really turns his crank.

Even Tom's stubborn determination to keep Lexie at a distance can't stop a kiss from leading to endless nights of hotter-than-hot sex. But when the wild ride ends, where will they go next?

Review:
Lexie is a sweet natured and sociable woman who is looking for someone to keep her company as she cycles the TransAmerica Trail. Tom is pretty much her complete opposite, he is happy in his own company and really, really doesn't want to be stuck with a companion for the 3 months it will take to ride from Oregon to Virginia. Tom's sister is worried about her reclusive brother though and thinks having a travelling partner would be just what he needs to bring him back out of his shell. When Taryn goes behind Tom's back and arranges for him to meet up with Lexie Tom's chivalrous side forces him to accept the arrangement - he can't back out at the last minute and leave Lexie on her own. That doesn't mean he is happy about things though and he is determined to find someone else to take over as Lexie's protector as soon as possible so he can make his escape. The fact that he is so attracted to her just makes him even more determined.

I love Ruthie Knox's writing so even though I have no interest in cycling I knew I would be in for a treat with Ride with Me. This story has all of Ruthie's trademarks - witty banter, great characters and incredibly hot sex and I enjoyed every minute. As someone who has only been to America once and isn't at all familiar with the route that the TransAmerica Trail takes I really liked getting a glimpse of the countryside as Lexie and Tom were travelling, there were a lot of times where I felt like I was cycling alongside them and I was able to clearly picture the rugged mountainside or the lush forests they were passing.

It can be hard for an author to keep my interest in a story that only really has 2 characters (yes, we met a few people along the way but they only really have minor appearances) but I never once found myself getting bored of Lexie and Tom. I absolutely adored both of these characters and I loved the way the story was told from both of their perspectives allowing us to really get to know them and get inside their heads. Lexie and Tom are so different to each other but that was what made them work so well together and in spite of their differences they share a lot of common interests. Lexie is very sociable and able to talk to anyone but at the same time she likes to follow the rules and she has planned every minute of their journey down to where they will stay and how many miles they will travel each day. Tom is much happier in his own company, he has become quite a recluse since something that happened in his past and he has lost the art of making small talk. Although he is a loner he is much more relaxed about things than Lexie is, he has been on adventures before and he knows that half of the fun is in the small things like stopping just because you want to appreciate the scenery or being able to detour off the main route to visit a landmark that interests you.

There are so many different sides to Tom that Lexie has trouble knowing what to expect from him next, one minute he is grumpy and distant but at other times he starts to open up to her and she sees what a nice guy he really is. He isn't the easiest person to get to know but Lexie finds herself attracted to all of the different sides to his character and I can't say I blame her - he is pretty damn hot! I love the way their relationship slowly develops throughout their trip, they both go on an emotional journey as well as a physical one and the connection between them felt incredibly real. They both have a lot that they can teach the other one, Lexie brings Tom out of his shell and makes him connect with the people around him while Tom helps Lexie loosen up and learn to go with the flow a bit.

Ride with Me is a fantastic contemporary story full of laugh out loud moments and a heart warming romance. You get to know Tom and Lexie so well that I wouldn't be even slightly surprised if I bumped into them walking down the street and they are the kind of people that you want to be friends with. I know that this is a story I'll be reading again in the future and if Ruthie Knox wasn't already on my list of favourite authors this book would have earned her a place there.

Source: Received from the author via Netgalley in exchange for an honest review