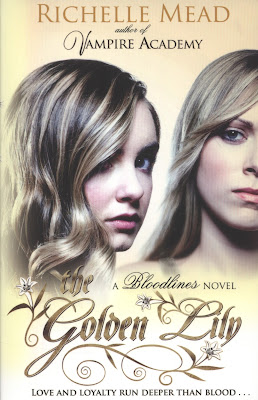 Will love lose her everything she knows?

Sydney is an alchemist.
She protects vampire secrets -
and human lives.

In hiding at a Californian boarding school, Sydney's life has become irrevocably intertwined with Jill Dragomir, the vampire Moroi princess she has been tasked with protecting. She has grown close to those in Jill's royal circle - and to someone in particular. Someone that forces her to question everything the alchemists believe in. Someone forbidden.

When a shocking secret threatens to tear the vampire world - her new world - apart, Sydney's loyalties are tested more than ever. Should she trust the alchemists - or her heart?

Bloodlines Series: (This is a spin off from the Vampire Academy Series)
Adrian's Lost Chapter (Free Short Story can be read here)
Bloodlines
The Golden Lily
The Indigo Spell
The Fiery Heart (release date to be confirmed)

Review:
I'm a huge fan of the Vampire Academy series so of course I couldn't wait to start reading the spin off Bloodlines series. I enjoyed Bloodlines when I read it and The Golden Lily was one of my most anticipated sequels of the year last year - I could not wait to pick it up and start reading! You're probably wondering why it has taken me so long to get around to writing this review then. I hate to say it but when I started reading The Golden Lily last year it annoyed me so much that I couldn't even finish reading it! I really want to love this series but for the first half of this book it just wasn't happening. I decided to try the book again because I keep hearing so many good things about the follow up The Indigo Spell and I'm actually glad I did give it a second chance. I don't think I'm ever going to be Sydney's biggest fan but I found myself really enjoying the last third of this book and now can't wait to see what happens next.

I'm going to start by talking about my love / hate relationship with Sydney, I hate to say it but she irritates the heck out of me most of the time! She annoyed me a little in Bloodlines but at the same time she showed enough of her inner strength and bravery for me to be able to respect her. That Sydney was completely absent for the first half of this book though. The way she goes on and on about her weight and is so adamant that she can't consume anything with a single calorie in it is enough to drive me insane, I seriously think the girl needs to be admitted to an anorexia clinic! I know she has body issues and is comparing herself to the impossibly beautiful Moroi but I worry about the message it sends to teens when someone who is supposed to be their heroine is constantly saying that a size 4 (which I think is equivalent to a UK size 6) is fat. The combination of her complaining about her weight and her dating the world's most boring man is what made me put down the book. I can't even remember her boyfriend's name but I think I would rather poke needles in my eyes than have to read about one more of their dates, watching paint dry would be more exciting!

I said I have a love / hate relationship with Sydney but so far I've only told you why I hate her so I think I need to balance this review up a bit. I get that she has been raised in a very strict way and she has always believed everything that the Alchemists have told her so she showed a lot of bravery in VA when she helped Rose knowing she would end up paying for it. I respect the fact that she has now started to look past the things she has always been told and is now beginning to make up her own mind about what is happening around her. She was always told that Moroi are evil but she knows from spending time with Jill, Adrian and Sonya that just isn't true and it makes her start to question everything else. Finally in the second half of the book we start to see Sydney's world view shifting and although I wish it would happen faster I'm glad that it is happening. There was one particular point towards the end of the book where Adrian spells out a few home truths to her and I wanted to jump up and down waving pompoms! Hopefully when she has had time to sort through what he said we should see some more big changes. Another thing I was extremely happy about was seeing Sydney start to embrace her own magical abilities - I can't wait to see more of that as the series continues.

Now lets talk about the rest of the book. I have to say I'm disappointed with several of the characters. Jill was incredibly selfish, childish and even reckless throughout the first half but again we see glimmers of hope towards the end of the book. Angeline acts much younger than her age but I can kind of understand that considering her upbringing and I would love to learn more about her family and the Keepers. The glimpses we saw of Dimitri weren't enough to satisfy me, it just isn't the same spending time with him when Rose isn't in the picture and I miss them as a couple so badly. It is impossible not to like Eddie though, although I can't for the life of me understand why he is so attracted to Jill, but I think my main reason for giving the book a second chance was to see more of Adrian. I'll say it outright - I love Adrian! I may never have wanted him to end up with Rose but I never liked the way she treated him so I desperately want to see him have his own happy ending. My heart broke for him in this book seeing the way his father treats him and it made it even easier to understand why he acts the fool so much and doesn't think he is capable of anything better. I actually really like the way Sydney sees through him and knows just how much he is capable of and towards the end of the book I even began to feel that they could be a good couple which was something I'd not been 100% on board with before.

I have to admit that I still have reservations about this series but if the next book can just take all of the positives from the end of The Golden Lily and run with it then I could start to really enjoy it again. I would love more than anything for these books to reach the heights of Vampire Academy and I do think that the potential is there. It's hard to settle on a final rating for this book, the lack of action and the fact I gave up reading makes the first half easily a 1 star read but the second half improved and the last quarter was probably 3.5 - 4 stars so I'm going to be generous and rate it 3.

Source: Received for review from Penguin in exchange for an honest review

Other Reviews:
If you have reviewed this book on your blog please leave a link to your review in the comments &amp; I'll add the link here.