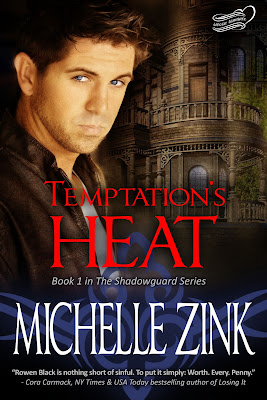 When Rowen Black is assigned to the elite unit of angelic assassins known as the Shadowguard, he thinks his biggest challenge will be overcoming his less-than-stellar reputation. But that’s before he meets his match in Scarlet Montgomery.

Beautiful, strong, and with a temper to match Rowen’s own, Scarlet is focused on the Shadowguard and her possible future as its leader. She’s become an expert at keeping her personal life separate from the Guard, all too aware that as the boss’s daughter, fellow warriors see her not as someone to be respected, but as someone to be protected.

Avoiding entanglements gets a lot harder when Rowen saunters into the room. Rowen puts the bad in "bad boy." Their connection is hot, visceral, and instantaneous.

When the pair are assigned to a joint investigation, they come face-to-face with their undeniable attraction, forcing Scarlet to consider that the connection is not only physical, but a destiny written in the halls of time.

Review:
Scarlet works hard to prove herself to the other warriors in the Shadowguard, she wants to be respected for her abilities and doesn't want anyone to give her an easy ride because she is the boss's daughter. This is particularly important when she could potentially become their leader in the future so she has a rule never to get involved with her colleagues. Rowen has just been assigned to the same Shadowguard unit as Scarlet, he has a bit of a reputation as a trouble maker and wants to use this fresh start to prove himself. He needs to keep his head down and stay out of trouble but that isn't going to be easy when Scarlet brings out all of his protective instincts. When they have to work closely together on a secret investigation the sparks fly but is the attraction between them strong enough to risk everything they've worked so hard for?

I have to admit that I've never read anything by Michelle Zink before, I've heard great things about her books though and have her YA Prophecy of the Sisters series on my to read pile. When I was offered a review copy of her first adult novella Temptation's Heat I couldn't resist, I jumped at the chance of reading it and I'm very glad I did. This is a great start to the Shadowguard series and has left me excited to read more of her work in the future. Before I start this review I have to say that I tend to look at novellas slightly differently to full length books, when I'm picking up a story with around 60 pages then I expect that the romance will happen a lot faster than usual and it doesn't bother me so much as insta love does in a novel. If you go into Temptation's Heat expecting a long drawn out romance between Scarlet and Rowen then you'll be disappointed but if you're looking for a quick but satisfying read full of sexual tension and great chemistry then this will hit the spot perfectly.

Not only do you have some great interactions between Scarlet and Rowen you also have some really interesting world building and we get to meet both of Scarlet's siblings (Lily and Ivan) who will each get their story told in this trilogy. I'm very curious to find out more about the members of the Shadowguard, they are descended from angels and the organisation exists to protect humanity from demons. On the other side you have the Legion who are descended from demons and are there to keep the balance between good and evil. I do have some questions about the treaty between the Shadowguard and the Legion but I think these will be answered as the series continues. I won't know for sure until I've read the second story Temptation's Kiss (which I'm planning on doing as soon as I finish this review) but I have a feeling that this is a series that needs to be read in order, there are too many open ends at the end of this story that I'm sure will be picked up in the next instalment.

If you're looking for a hot story that can be read in less than an hour then I'd recommend picking up Temptation's Heat. I'm looking forward to continuing the series and I will definitely be reading more by Michelle Zink in the future.

Source: Received from Swoon Romance in exchange for an honest review