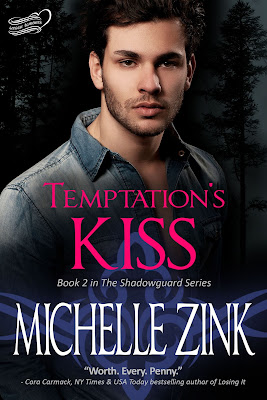 Lily Montgomery is perfectly happy taking care of everyone else. That is, until her friendship with Shadowguard warrior, Kane Dawson, begins to blossom into something more.

But Lily has a secret. One that will keep her from ever making her feelings known to Kane.

One of the Shadowguard’s fiercest warriors, Kane has a soft spot for Lily. A long-standing member of the Shadowguard, he can’t figure out when his feelings for Ambrose Montgomery’s youngest daughter morphed from brotherly affection into desire and an unfamiliar longing that feels a lot like love.

Kane holds himself in check knowing that Lily deserves better. A man in a suit, dinner at six every night, rosy-cheeked children who won’t have to worry that their father might be killed by one of the Legion’s wraiths.

But when the pair are thrown together by a set of circumstances beyond their control, they are forced to confront their growing passion and decide if love is worth the risk of baring it all.

Review:
Lily might be the daughter of the Shadowguard boss but she has never wanted to follow in his footsteps like her older siblings. She would much rather spend her time baking than fighting and loves to take care of everyone around her by running the home where the Shadowguards live together. She has been friends with Kane for years but her feelings for him are so much more than that, if only she didn't have a secret that would stop them ever being together she might be brave enough to tell him how she feels. Kane is one of the strongest warriors in the Shadowguard, he loves what he does and never wanted to be anything other than a fighter but thinks that Lily deserves so much more than that. In spite of their differences Kane is crazy about her and how can he resist temptation when the attraction between them is so fierce? What is Lily's secret and will it really keep them apart?

I really enjoyed the first instalment to the Shadowguard series so was looking forward to reading Temptation's Kiss. The story picks up not long after Temptation's Heat ended and I think this is a series that you really need to read in order so that you get the most out of the world building and character development. We saw both Kane and Lily in the previous story so were already aware of how they felt about each other and that helped Michelle Zink to create a believable romance between the two of them in just over 40 pages. I love the fact that Lily is so different to her sister, she isn't a fighter and is much softer than Scarlet but there is nothing wrong with that and Kane is drawn to her because of the way she cares for everyone. Lily is the kind of woman that it is easy to imagine being friends with, she puts others first and is happy with the life she has. It is only her secret that stops her from approaching Kane but I don't want to say more about that because of spoilers.

Kane is a great guy, he is protective of Lily and his fellow warriors and respected by everyone he works with. He genuinely cares for Lily but it is obvious he wants more than friendship. The relationship between them is sweet but they still have an incredibly intense attraction and I enjoyed seeing them work through their issues and fears. It was also nice to see how Scarlet and Rowen are getting along and get to see a nicer side to the girl's brother Ivan. I have to admit that I didn't think I was going to like Ivan after what we saw of him in the first novella but I now have a bit more hope for his story which is the last instalment of the trilogy. If you enjoyed Temptation's Heat then I'm sure you'll love Temptation's Kiss. If you haven't started the series yet then I'd recommend reading the stories in order but these novellas are perfect for when you're looking for a quick, sexy read.

Source: Received from Swoon Romance in exchange for an honest review