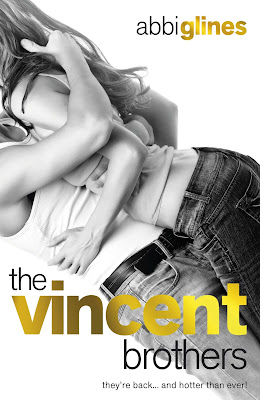 Smouldering Sawyer Vincent is in a bad way after his break-up with Ashton Gray. Losing the girl he dreamed of marrying is bad enough, but to lose her to his brother Beau is plain humiliating.

But Sawyer won't be alone for long - not if Ashton's cousin Lana has her way. Lana's grown up to be a pouting femme fatale and she wants Sawyer, real bad.

But deep down, will Lana ever feel good enough to complete with Ashton in Sawyer's eyes? She's red hot, but inside, Lana's still the shy geeky girl she used to be.

Lana's gonna need all her sexy powers of persuasion to make this gorgeous Vincent boy her man . . .

Review:
I had a few issues with The Vincent Boys, mainly because of the ongoing cheating between Ash and Beau (cheating is something that really pushes my buttons and I found it very hard to forgive them for their actions) but I really enjoyed Abbi Glines' writing style and had high hopes for The Vincent Brothers. I felt so sorry for Sawyer in the first book and I wanted to see him get his own happy ending so I was really looking forward to reading this sequel. Unfortunately the story failed to live up to the hype and although it was an OK read it didn't blow me away like I expected it to.

The Vincent Brothers continues the story several months after the last book ended, Ash and Beau are now dating and very happy together while Sawyer looks on from the sidelines. He has tried to push his jealousy to one side and remain friends with his brother Beau but he is still crazy about Ash and it hurts to see the two of them together after they betrayed them so badly. Ash's cousin Lana has always had a thing for Sawyer and she is hoping that now he is no longer with Ash she might have a chance with him. She has given herself a major makeover and is planning on spending the summer with Ash so she can try to win Sawyer's heart. Sawyer is attracted to the new Lana but his main reason for dating her is because he thinks it will make Ash jealous and help him win her back. Can Lana help Sawyer move on and leave Ash in the past or will she end up getting her heart broken?

The Sawyer we see in this book is very different to the one we met before, he is bitter about the way things ended between him and Ash, he is extremely jealous of her new relationship with his brother and he watches them from a distance like a love sick puppy. I had felt sorry for him before but the way he was so happy to use Lana to try and win back Ash made me really, really angry with him. He lost all my sympathy because of the way he treated Lana. Lana annoyed me because she was so willing to put up with Sawyer treating her like crap, she let him walk all over her and would then take him back when he hadn't even really apologised for his actions. Yes they had chemistry but it didn't feel as intense as the connection between Ash and Beau in the first book. There were so many times when I wanted Lana to tell Sawyer to get stuffed and for her to walk away from the whole sorry mess and I have to admit I had more respect for her when she did just that, I was glad she made him suffer and realise just how badly he had screwed things up.

I wasn't a big fan of Ash in the first book and I really grew to hate her in this one, she seemed to take great pleasure in being in the middle of the brothers and loved having them both lavish her with attention. She would turn to Sawyer in a second when Beau wasn't available but then drop him twice as fast the minute Beau came back, I understand she has a history with Sawyer but she knows how much he loves her and how badly she hurt him and I thought she should have had the decency to keep away from him. I'm not sure why I expected any different though because she always did tend to act like a selfish and spoilt child. Beau was the best thing about the first book but even he started to get on my nerves in this one, all he did was growl like a caveman whenever Sawyer so much as looked at Ash. If Sawyer made any kind of negative comment (which I felt he had every right to considering the way Ash & Beau had betrayed him!) then Beau would threaten him and I didn't really feel that Beau had any sympathy towards his brother for what he'd been through.

Overall I'd have to say I was disappointed with The Vincent Brothers. It wasn't a terrible book but it could have been so much better and I was left feeling unsatisfied. I don't even know what to think about the cheesy endings, the romance reader in me was pleased to see a HEA for the couples but the realist in me found it all very hard to believe. I will read more by Abbi Glines in the future but I have to confess I'm kind of pleased that this series is over and done with.