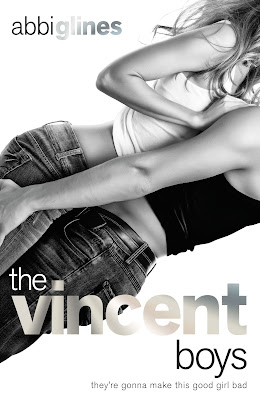 But when Sawyer leaves town for the summer, Ashton gets to spending time with his cousin Beau. Unlike Sawyer, Beau is a bona fide bad-boy - drinking, sleeping around and generally going the way of his white-trash parents.

Ashton knows it's wrong, but something about Beau has her all hot and bothered. He's bringing out the bad girl in this sweet Southern belle . . .

Sultry, romantic and hotter than the Alabama sunshine . . . What will the Vincent Boys do for you?

Review:
Ashton was best friends with cousins Beau and Sawyer from childhood, the three of them were inseparable growing up and always did everything together. That all changed when Sawyer and Ashton became a couple though and now Ashton and Beau have barely spoken in the last three years. When Sawyer goes away with his family for the summer Ashton is lonely until she starts spending time with Beau. Beau and Sawyer couldn't be more different but which one does Ash belong with?

I've said it before but I'm going to say it again - I can't stand people who cheat on their partners. I have been known to forgive characters for making a one off mistake, after all we're all human, but if there is one thing I really despise it is ongoing cheating so I'm afraid The Vincent Boys lost points with me because of that. It hit one of my hot buttons and I know that isn't something that will bother everyone as much as it bothered me but this is my review so I have to be honest about it. Ashton has been dating Sawyer for 3 years, she supposedly loves him, one things for sure he never forced her to go out with him, but the second he's out of town she seems to forget all about him and start pining for his cousin. Sawyer is supposed to be the perfect guy - he's a good student, he's good looking, athletic and he adores Ashton but that isn't enough to make her happy. She has never felt good enough for him, she has to put on an act of being perfect and she is constantly trying to prove to herself that she is worthy of him, none of this is because of the way he treats her though - it's because of the way she sees herself. I could actually understand her low self esteem though, I think most teenagers have probably felt unworthy at some point and will be able to relate to that but I did find her attitude frustrating.

Unfortunately as much as I felt sorry for Sawyer I didn't really get to know him well enough to think of him as anything more than the stereotypical nice guy, he didn't show enough of a personality for me to particularly care about him and then the way he acted towards Ashton and Beau after he found out what had been going on just made no sense to me. I'm sure we're going to get to know him better in the second book but at the moment I'm not really excited about spending more time with him. Beau on the other hand I have to admit to developing a crush on, that boy is seriously hot! He is also a fairly typical bad boy and at times he was absolutely vile in the way he treated his girlfriend. Thankfully his attitude improves quite quickly and once Nicole was out of the picture I really did grow to like him. I was still unhappy with what he was doing behind his cousin's back but at least he was prepared to fight to be with Ashton. He knew what they had done was wrong but he was ready to step up and admit to his mistakes and deal with the consequences which is more than can be said for Ashton.

One of the reasons that I really grew to hate Ashton was her complete lack of remorse. For a start she has been dating Sawyer for 3 years and in that time she has completely avoided Beau - they haven't even spoken in the classes that they share! - but the second Sawyer is out of the picture I'm supposed to believe that she can't keep away from Beau. Why does she suddenly have this desperate need to be with him and why can't she keep her hands to herself? Why is she so prepared to drop her knickers in an instant for Beau when she hasn't taken that step with Sawyer after three years together? Even worse why is she still mentally planning on going back to Sawyer as soon as he returns home even after she has slept with Beau? It wasn't even that she was thinking that she'd made a huge mistake with Beau and was regretting it, no she was in fact planning on making the most of the time she had with Beau until Sawyer got home and then going back to her perfect boyfriend and their perfect life. No. Just no. I can't respect a character who thinks like that. I just can't do it and from that point on I was beyond caring what happens to her.

I sound like I really hated the book but surprisingly in spite of the problems I have mentioned I did find it a quick and enjoyable read. I was sucked into the story and I had to keep reading because I wanted to know how things would play out between the three of them. Beau and Ashton had great chemistry and if I completely put Sawyer out of my mind I could really enjoy their interactions with each other. I'm just a bit disappointed because it would have been so easy to make the story so much better. The relationship between Ashton and Beau could have been so much more believable if they had rekindled their friendship and spent time getting closer emotionally before they jumped into bed with each other. I might have even liked Ashton more if she had shown some sincere remorse for hurting Sawyer and if she had actually grown up a bit by the end of the book.

I did like Abbi Glines' writing style (even if there were a number of errors in the book) and I am very curious to see what happens in The Vincent Brothers. I'm wondering if I'll develop as big a crush on Sawyer in the second book as I did on Beau in this one. I'm also quite pleased that Ashton isn't going to be the heroine of the sequel because I'm still not a fan of hers. If it hadn't been for the cheating I would have rated The Vincent Boys a solid 4 stars and I do think that issue won't bother everyone as much as it did me. I think fans of the new adult genre who are looking for a sexy new contemporary romance series will enjoy this one so don't let my negative points put you off giving it a try. Even with those issues I still found that there was a lot to like about the book.