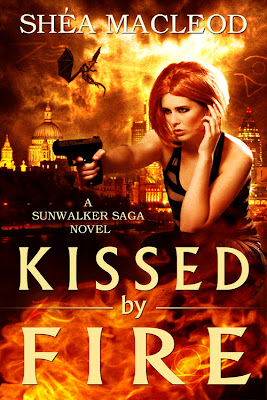 Morgan Bailey needs a break from the mess her life has become. A girl can handle only so much drama - and her latest assignments have definitely brought the drama. So when her boss calls with an easy job, Morgan jumps at the chance to get back to her roots and do what she does best: a good old-fashioned vamp hunt.

But then things get really weird. When she arrives in London for her so-called simple assignment, she encounters a new supernatural challenge: dragons. It seems they aren't so extinct after all. Morgan's only chance of preventing certain carnage as the dragons are unleashed is to uncover the truth about her own past. Doing so means unearthing long-buried secrets, and learning to control the Darkness growing inside her.

Review:
Morgan's best friend and boss Kabita has received some bad news, her cousin has been murdered and it looks like she was killed by a species that are supposed to be extinct. Morgan offers to return to London with Kabita and help her uncover exactly what happened to her cousin but she also has a bit of a secret agenda and is hoping to track down the vampire who attacked her several years ago. Was Kabita's cousin really killed by a dragon and if she was how will they track down a killer from a species that hasn't been seen in centuries?

I have to confess that I wasn't the biggest fan of the first book in this series. I felt that Kissed by Darkness had a lot of potential but hadn't managed to live up to that and there were a lot of things that irritated me about the story and Morgan in particular. It's fair to say I had reservations about continuing the series but I wanted to give it a second chance for three reasons; firstly I have read a lot of series that don't have the strongest start but have developed really well in subsequent books and turned into favourites; secondly I have been desperate to find more urban fantasy books with a London setting and although this whole series isn't set in the UK I knew this instalment would be; finally this book has dragons in it - I absolutely adore anything dragon related so that was the reason that really sold me. I have to say that Kissed by Fire was slightly better than the first book but it still didn't manage to wow me and unfortunately a lot of the things that irritated me in the first book continued to irritate me in this one.

Morgan has got a little better at showing that she has some kick ass vampire slayer powers but she still makes several stupid mistakes and she needs to stop repeatedly mentioning how she was attacked by a vampire and gained all of these special abilities. Readers only need so many reminders about things we've heard before - even in a sequel if you're going to recap parts of the first book it only needs doing once, anything more than that and it just gets annoying. The author is also running the risk of taking Morgan beyond kick ass and turning her into an unbelievable superhero by giving her too many abilities. I think there needs to be a bit more balance between the characters and the powers they each have.

Morgan's libido is still enough to drive me insane, she had actually calmed down a bit during the first half of the book which had me giving a huge sigh of relief but after a certain event with Jack she goes straight back into lust after anything in trousers mode. I am absolutely sick to death of hearing how hot all the guys are and I think it is hilarious that the only men she doesn't lust after always turn out to be the evil bad guys. If only she could realise that the bad guys are always the ugly ones she would save herself a hell of a lot of time and investigation work! I'm also not impressed with the way Jack suddenly turned into a selfish idiot after being such a nice guy in the first book. That just seemed like a convenient way of throwing Morgan back in Inigo's direction and I'm just so over the whole love triangle thing. It wouldn't have been so bad if I liked Inigo more but he was a creepy stalker in the first book and I'm still not a fan.

I did like the introduction of the dragons and I hope we get to learn more about their history and the abilities they have in later books. I also want to know more about the Sunwalkers and their connection to Atlantis and the Knights Templar. The discovery of a new relative in Morgan's life means she might finally start to get more answers about her heritage which I think she desperately needs. The problem is that each book seems to focus on bringing a new supernatural species into the equation and so far not enough time has been spent developing the ones that we are already aware of. I'm torn when it comes to this series, there are so many things that bug me but in spite of that I do find the books are quick and fairly fun reads, I'm just not sure that the good outweighs the bad or that I have enough patience to continue reading it.