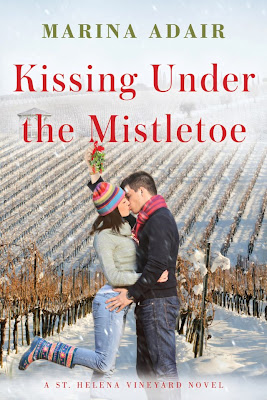 Regan Martin stopped believing in Christmas miracles six years ago when she lost everything—her house, her job, and her impeccable reputation in the wine industry—after she fell in love with a man she had no idea was married. Then Regan gets a chance for a fresh start in the Napa Valley. With her dream job, dream home, and her daughter enrolled in a wonderful new school, she starts wondering if holiday wishes really do come true.

But she soon tumbles back down to earth when she learns that her new boss is none other than Gabe DeLuca, the scorned wife’s brother. Gabe wants nothing more than home-wrecking Regan Martin out of his life, his sister’s world, and his family’s business. Mostly, he wants the lush beauty out of his head. Yet his attempts to run her out of town have him thinking twice, especially when he sees that Regan may hold the key to tracking down his sister’s stolen start-up capital. Even worse for Gabe, Regan might just be his Christmas wish and hold the key to his heart.

St Helena Vineyard Series:
Kissing Under the Mistletoe
Summer in Napa
Autumn in the Vineyard (October 2013)
Future titles and release dates to be confirmed

Review:
When Regan fell in love with Richard she had no idea that it would cost her everything, she didn't even know he was already married until she was five months pregnant with his child. When Richard vanished Regan was left broken hearted and alone to raise their daughter. At least his wife Abby had her family to support her and when Abby's brothers were unable to find the cheating husband they were happy to take out their anger on his mistress. For the last 6 years the DeLuca men have made Regan's life miserable costing her countless jobs and ruining her reputation in the wine industry. But this Christmas things are finally looking up for Regan and she has been offered her dream job and the chance to start over in a new town where she can build a life for herself and her daughter Holly. What she doesn't realise is that her new boss will be Gabe, the oldest of the DeLuca clan and the man behind everything that has happened to her. Gabe wants nothing more than to protect his sister Abby and that means getting Regan away from their home town fast. He isn't going to let anything get in the way of that goal - especially not an unwanted attraction to his family's enemy.

Every so often a book comes along that sucks me in from the very first page and makes it impossible for me to do anything else until I've finished reading it and Kissing Under the Mistletoe was one of those books. I picked it up planning on reading just one chapter before making myself some dinner but several hours later I was still reading. In fact I only managed to put the book down very briefly to grab a quick snack before I jumped back in to devour the rest of the story. I have now added Marina Adair to my list of must read authors and I can't tell you how pleased I was to discover that this is the first book in a new series.

I found it easy to connect with Regan from the moment I met her, she was young and innocent and completely betrayed by the man she loved and I had nothing but sympathy for her. I was so angry at the way the DeLuca clan had made life so difficult for her - especially considering she'd had no idea that Richard was married. She was as much his victim as Abby was and had spent a further six years being victimised for something that she had no control over. To say I was livid at Gabe and his family is an understatement and to be honest I didn't think he had a chance in hell at redeeming himself in my eyes. You have to admire Regan because although she has been through hell she has never given up, she never took the easy option of giving up her career and walking away from the wine industry and she never, ever let her daughter suffer because of what had happened. Holly was her world and Regan would do anything to protect her and make her happy. There were times that Regan's story brought tears to my eyes but more than anything I admired her strength and wanted to see her find happiness.

I've already mentioned how much I hated Gabe in the beginning so I was incredibly surprised that Marina Adair managed to make me fall for him. As you get to know him you see that he ended up responsible for his four younger siblings from a young age after their parents died and all he has ever done is try to protect them. He was convinced that Regan knew that Richard was married but went ahead and had an affair with him anyway and he had no idea that she had a young child to care for. None of that makes what he did to her acceptable but it did make it easier to understand. The fact that we get to see things from his perspective was what helped me fall for him though - you get to see first hand how guilty he feels when he realises that Regan was another innocent victim and when he sees first hand how hard life has been for her since then. I enjoyed watching Gabe discover his conscience and try to make up for what had happened but I enjoyed seeing Regan tell him where to go even more. The banter between them was one of the highlights of the book for me, the chemistry between them was off the charts hot but while their eyes were stripping each other naked their words were cutting them to the core. I knew from their heated looks that they'd be good together but boy were the sexy times worth the wait!

Other highlights included Holly who was utterly adorable - I dare anyone not to fall in love with her - and Gabe's grandmother ChiChi and her friends who Regan had nicknamed the Mrs. Clauses. There were a lot of laugh out loud moments at their antics and they really helped lighten the tone of the story. Kissing Under the Mistletoe is definitely my favourite Christmas read of the year, funny, cute, romantic and hot, it was the perfect book to get me in the mood for the holidays and I know it is a book I'll be re-reading in the future. Fans of small town romance series like Jill Shalvis's Lucky Harbor books will love this one - it has the same feel good factor and great cast of characters who I am looking forward to spending more time with.