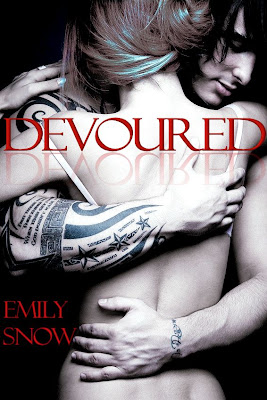 Sienna Jensen had no plans to return home when she graduated college last spring—after all, her dreams lie in California. But when she discovers her grandmother’s Nashville home has been foreclosed, and the new owner has started the eviction process, Sienna has no other choice but go back to Music City. And she comes face to face with the flawed, gorgeous man she never thought she’d see again. The man who now holds the deed to her grandma’s estate.

When millionaire rock star Lucas Wolfe finds the outspoken redhead glaring at him from across a courtroom, he’s both infuriated and intrigued. He still can't get the night Sienna almost spent with him out of his mind, and the chemistry between them is as undeniable as it was two years ago. He craves Sienna more than ever. And just like everything Lucas hungers for, he’s determined to have her.

Now, Lucas will do whatever it takes to lure Sienna into his bed, even if that means making a deal with her: ten days with him, playing by his rules, and he’ll hand over the deed to her grandmother’s home. Though she agrees to the arrangement, Sienna is conflicted. Because of her duty to her family. Because of promises she’s made to herself and a past that still haunts her. And as Lucas’s game of seduction continues, and Sienna is introduced to his dark, erotic world and even darker background, she realizes that at any moment, she could be devoured.

Devoured Series:
All Over You (Novella)
Devoured
Consumed (2013)

Review:
Sienna first met rock star Lucas 2 years ago when she was working on the set of one of his band's video shoots. The attraction between them was instant but Sienna was uncomfortable with the way Lucas wanted her to submit to him and they haven't seen each other since. Sienna couldn't wait to get away from her home in Nashville but after a desperate phone call from her brother she is forced to come back and help her grandmother try to save their family home. The house has been foreclosed thanks to outstanding debts and now the new owner wants to have them evicted. The last person she expects to run into is Lucas but it turns out he is the person who is trying to take her grandmother's home away from her. Lucas has never forgotten Sienna and now that he has seen her again he is prepared to go to great lengths to make her his. He offers her the deal of a lifetime - spend 10 days working as his personal assistant and he will give her the deeds to her grandmother's house. It's an offer that Sienna can't refuse but can she make it through 10 days with Lucas and not end up with a broken heart?

I can never resist a story about a hot rock star so I knew I wanted to read Devoured the moment I first read the blurb. This is a great debut from Emily Snow, one I really enjoyed and that has left me desperate to get my hands on the sequel Consumed (is it January 2013 yet?). I'm also really excited that the author is going to be offering a freebie prequel novella called All Over You that will tell the story of how Lucas and Sienna first met from Lucas's point of view. If you're looking for a contemporary erotic romance with a sexy, tattooed rock star who will stop at nothing to get what he wants then I'd highly recommend giving Devoured a try. It's a book I read in one sitting because I couldn't put it down!

I don't think that Sienna is a natural submissive, she has had such a troubled upbringing that she is just desperate for a peaceful life and she tends to let everyone around her have their own way because it makes life easier. Perhaps it is her attraction to Lucas or it could be the effects of her disastrous previous relationship but he is the one person she is willing to stand her ground against. She is scared to give him any kind of control over her or her actions and because of that she finds the courage to stand up for herself. Lucas isn't what I'd call a typical Dom either but he definitely likes to be in control and is used to always getting his own way. It drives him insane watching Sienna willingly submit to everyone around her but being the complete opposite around him. He wants to prove to her how good things could be between them if she would just relax and trust him a little. I think one of the things I like the most about Lucas is the way he encourages Sienna to stand up for herself and it was good to see her confidence grow throughout the story.

"Oh, we'll fuck Sienna. Believe me, it's been bound to happen since I first laid eyes on you. But this time it's going to be because you beg me. Not the other way around. And when you do, it'll be because you're ready to to completely give yourself to me."

The ending of Devoured made my jaw drop, I really wasn't expecting a certain event to occur and I'm just going to say I'm really grateful there was an epilogue to keep me going until the next book is released or I wouldn't have known what to do with myself. I am absolutely desperate to know what happens next and Consumed will be jumping straight to the top of my to read pile the second I get my hands on a copy! If you haven't already got your hands on this book I really don't know what you're waiting for.