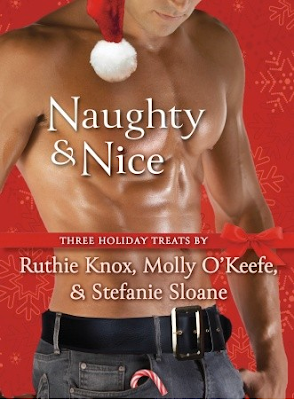 ’Tis the season for romance with three original holiday-themed novellas! Unwrap this festive eBook bundle and discover why these authors are quickly becoming the biggest names in the genre. Ruthie Knox tells a heartwarming contemporary story of first loves given the gift of a second chance; Molly O’Keefe releases the ghosts of Christmas past with a prequel to her novel Crazy Thing Called Love; and Stefanie Sloane weaves an irresistible Regency tale of fiery passion that burns deep on a cold winter’s night.

ROOM AT THE INN by Ruthie Knox

Carson Vance couldn’t wait to get out of Potter Falls, but now that he’s back to spend Christmas with his ailing father, he must face all the people he left behind . . . like Julie Long, whose heart he broke once upon a time. Now the proprietor of the local inn, Julie is a successful, seductive, independent woman—everything that Carson’s looking for. But despite several steamy encounters under the mistletoe, Julie refuses to believe in happily ever after. Now Carson must prove to Julie that he’s back for good—and that he wants her in his life for all the holidays to come.

ALL I WANT FOR CHRISTMAS IS YOU by Molly O’Keefe

Maddy Baumgarten and Billy Wilkins are spontaneous, in love, and prepared to elope the day after Christmas—that is, if Maddy’s family doesn’t throw a wrench in their plans. After all, Maddy’s barely out of high school and Billy’s a notorious bad boy. Maddy doesn’t care about Billy’s rough past—all she cares about is living in the here and now. But after Maddy’s mother stops speaking to her in protest, and a Christmas Eve heart-to-heart with her father leaves her with butterflies, Maddy starts to get cold feet. She loves Billy, but is she taking this big step too soon?

ONE PERFECT CHRISTMAS by Stephanie Sloane

After being jilted by her fiancé, Jane Merriweather turns to her dear childhood friend, the Honorable Lucas Cavanaugh, for support—and unlocks the smoldering desire simmering in the man’s troubled heart. Frightened by his newfound feelings, Lucas flees to Scotland. But when the Christmas season brings them together again, one glance is all that’s needed to reignite his yearning. If Lucas can convince Jane that his intentions are as pure as the falling snow, they’ll turn a dreary December into a joyous Yuletide affair.

For more information about any of these authors you can visit their websites by clicking the links below:
Ruthie Knox's website
Molly O'Keefe's website
Stephanie Sloane's website


Room at the Inn by Ruthie Knox

Carson couldn't wait to get away from his home town and left as soon as he was old enough. Apart from the occasional visit home he hasn't looked back since but now thanks to his father's ailing health it looks like he's going to be trapped in a longer visit. The only thing even slightly attractive about staying in town is spending time with his ex girlfriend Julie but Julie has had her heart broken by him one too many times and she isn't going to let him back in without a fight.

The main reason I wanted to read this anthology was for the story by Ruthie Knox, I've read and loved her work in the past so I had high hopes for her contribution and Room at the Inn didn't disappoint - it was my favourite story in the anthology. Carson has spent his whole life running from his feelings, he was so convinced that he would lose Julie one day that he ran out on her before things could get serious (now there's some typical man logic at work if ever I saw it!). Since then he has been so busy focusing on staying away from home that he's forgotten what is missing from his life. I found it quite amusing watching him go from desperately trying to escape to realising that Julie is all he has ever wanted and having to convince her that this time he means it. It would have been easy to feel sorry for Julie but after getting her heart broken she picked herself up, dusted herself off and got on with building a life for herself. She may not have had the man she loved in her life but she was determined to chase her other dreams and you have to admire her for that. Room at the Inn is a really sweet, and definitely sexy, story of two lovers who are reunited and given the opportunity to try again and I really enjoyed reading it.


All I Want for Christmas is You by Molly O'Keefe

Maddy and Billy are childhood sweethearts who are desperate to start their lives together. They come from very different backgrounds - Maddie is from a wealthy and happy home while Billy is a bad boy from the wrong side of town - but that has never changed the way they feel about each other. Now with Billy's sporting career about to take off they have plans to get married on Maddy's 18th birthday. Maddy is desperate for her parents approval to get married but what will they think when they find out about the couple's plans and will the wedding actually go ahead?

I'm going to be honest and admit that my personal experiences probably coloured my view of this story so that is probably one of the main reasons I didn't enjoy it. I could really relate to Maddy and Billy's plans to get married and live happily ever after, it was something I desperately wanted myself at that age so I didn't find it at all shocking that they wanted to marry so young. I really liked Billy, I admired him for the way he had coped with his poor upbringing and become so determined to make a success of himself. He worked hard to help his sisters and he obviously really cared about Maddy and would do anything for her. He was so sweet and I badly wanted him to get the happy ending he deserved. My main problem was with Maddy - I just didn't warm to her at all. She came across as very selfish and I never really felt that she loved Billy as much as he loved her. I actually got to the point where I didn't want them to marry because I didn't think she deserved someone as nice as him. Reading All I Want For Christmas actually left me feeling miserable which is the last thing I want from a romance - especially a Christmas one! I have since found out that this is a prequel for Molly O'Keefe's next novel Crazy Thing Called Love (due to be published early next year) so perhaps Billy and Maddy's story will reach a more satisfying conclusion in that book but unfortunately I'm not interested enough to want to carry on reading.


One Perfect Christmas by Stephanie Sloane

Jane and Lucas have been friends since they were children but it wasn't until recently that they both realised they had feelings for each other that go way beyond friendship. Lucas is frightened by the strength of his love and rather than admit how much he cares he chooses to bury his head in the sand. Until he is shocked by the sight of another man attempting to court Jane that is, then he decides it's all out war and he must make her realise that they belong together.

I have to admit I was quite surprised to find a regency romance as part of this anthology, I'd just assumed that all of the stories would be contemporary romances, but it made a nice change so I'm not complaining. One Perfect Christmas was a sweet and fun friends to lovers story that had me smiling the whole way through. Both main characters were likeable and made a cute couple but I have to give a major shout out to Reginald the matchmaking donkey who I adored. My one complaint would be the way Jane goes from virgin to sex goddess on their very first encounter. I'm all for a hot sex scene but it has to be believable and fit the characters and unfortunately that wasn't the case here. I still enjoyed the story overall though and will definitely check out more of Stephanie Sloane's books in the future.