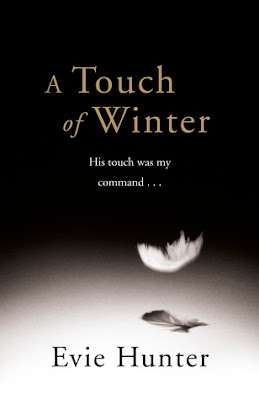 A surprise anniversary trip to see her Dom turns into a nightmare for Abbie Marshall. She arrives at his home a day early and finds him with another woman. Devastated by his betrayal, Abbie does what she always does when she gets into emotional trouble – she runs like hell.

One that she's not sure she can forget.

Review:
A Touch of Winter is a very short story (around 30 pages) that is basically an epilogue for The Pleasures of Winter. Abbie has a surprise planned for Jack to celebrate their first anniversary but when she arrives at his house earlier than expected she's in for quite a shock when she discovers Jack in his playroom with another woman. Feeling hurt and betrayed Abbie makes a run for it but Jack isn't going to let her go easily and sets out to prove they were meant to be together.

I have to admit that I was irritated by Jack's actions in the story, I think any woman who walked into the same situation that Abbie did would have had a similar reaction to her and I didn't blame her in the slightest for the way she walked out on him. If Jack had come after her and apologised when he explained what she had seen then I would have found it much easier to forgive him but the way he turned it around and put all the blame on her because she ran out on him really annoyed me. Yes, she probably should have stopped and asked him what the hell was going on but if he'd been open about what he was up to right from the beginning then they'd never have found themselves in that situation in the first place. I have to admit that the make up scene was very enjoyable though!

A Touch of Winter is the kind of story that a lot of authors offer as freebies on their website and I have to admit that when I purchased this from Amazon I was expecting more than I got. Yes the story is well written, yes it was good to catch up with Jack and Abbie and yes the sex scene was undoubtedly hot but there were also numerous typos and spelling mistakes that I found irritating in a story that I've paid for. I'm much more forgiving of those kind of mistakes when I'm reading a freebie. In a lot of ways it felt like this was just published as a way of making extra money from fans of The Pleasures of Winter and I don't appreciate feeling like I've wasted my money so that did effect my rating of the story. I do think fans of the series will enjoy the story but I'm not convinced it's worth the price I paid for it.