Review: All I Want for Christmas is a Duke - Anthology 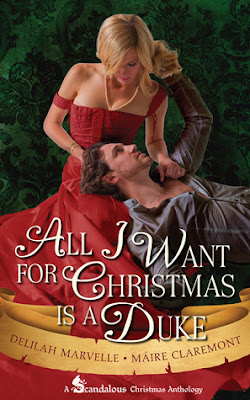 Lady Jane left her father, the Earl of Chadwick, and the ton behind to experience life on the stage. After a disastrous marriage, the widow is living on the edge of poverty, determined to guard her heart, when a secret admirer from her past demands a second chance.

Shy and retiring Martin Nicholas Pierce, the Sixth Duke of Somerset, has carried a torch for Lady Jane since her youth, but he is five years her junior. When she married another man, he left for Europe, determined to put her out of his mind. After returning to find Lady Jane free, he vows to replace the memories of her cursed Twelfth Night with a new beginning.

The Twelve Days of Seduction By Màire Claremont

Alexander Hunt, Eighth Duke of Berresford, is aware his ward's governess isn’t quite what she seems. Although Miss Flint is beautiful and intelligent, she misrepresented herself to gain employment, and he threatens to give her the sack mere days before Christmas.

Desperate to convince the sexy duke not to tear her from the little girl she's grown to adore, Adriana challenges him to seduce her before the Twelve Days of Christmas have come to an end, although she fears it may cost her heart. Alexander accepts the challenge, unconcerned that he has as much to lose, if not more, than the delectable Miss Flint.

For more information about any of these authors you can visit their websites by clicking the links below:
Delilah Marvelle's website
Maire Claremont's website

Lady Jane left behind a life of privilege when she defied her father, the Earl of Chadwick, to become an opera singer. She was courted for months by letters from a mysterious Mr X but two weeks after marrying the man she thought was the letter writer she discovered she had been deceived. The Duke of Somerset Martin Pierce was childhood friends with Jane and despite being five years younger than her he had fallen madly in love. Unable to get past his crippling shyness he used letters as a way of telling her how he felt but he was devastated when she married someone else and he immediately left the country rather than watch her in the arms of another man. Now that he is back from his travels and has discovered that Jane is free again he is determined to finally make her his.

This was a very sweet friends to lovers story that I really enjoyed reading, it was the first time I've read anything by Delilah Marvelle but I'll definitely be keeping an eye out for her books in the future. Jane and Martin had a special friendship as children and Martin's feelings quickly developed into more. Jane never really looked at him as more than a friend because of the age difference between them but she missed his friendship dreadfully when he left to go travelling and didn't even say goodbye. They have both changed a lot in the years since they last saw each other, Martin has gone from an incredibly shy seventeen year old to a confident man who knows how to get what he wants from life. Jane on the other hand has gone from being a social butterfly who was full of confidence to someone who is wary of having her heart broken again and who prefers to spend her time out of the limelight. Can Martin's love help her regain her confidence or will she see his actions in the past as yet another betrayal of her trust?


The Twelve Days of Seduction by Maire Claremont

Adriana has had a difficult life but she has clawed her way out of the gutter and worked incredibly hard to become a respectable governess to the Duke of Berresford's young ward. For the last year she has been living a dream and she loves young Georgiana like a daughter but she knows everything will come crashing down around her if Alex ever finds out about her past. Alex is livid when he finds out that Adriana has deceived him and no longer feels he can trust her to raise an innocent child. Rather than throw her out just before Christmas he decides to make her an offer, since he has always been attracted to her he decides to act on that and make her his mistress but only on the condition that she stays away from his ward. Adriana knows this is an opportunity she can't afford to pass up, especially when she has always admired Alex from afar, but she can't bring herself to leave Georgiana and is determined to find a way to persuade Alex to let her keep her role as governess.

I really enjoyed Maire Claremont's story, the way Alex sets about seducing Adriana was romantic but also very sexy and I found myself laughing out loud at the banter between them. I think what I liked most was the way Alex comes to respect her for the woman she has become in spite of her horrible childhood. It wasn't easy for her to make something of herself after everything she has been through but she has never wanted sympathy, just a chance to prove herself. They make a great couple, especially since he is so prepared to stand by her no matter what anyone else thinks. I also enjoyed their interactions with Georgiana and the way Adriana helps Alex become closer to his ward. This was a perfect Christmas treat and it has left me incredibly excited about Maire Claremont's debut novel The Dark Lady which will be published early in 2013.