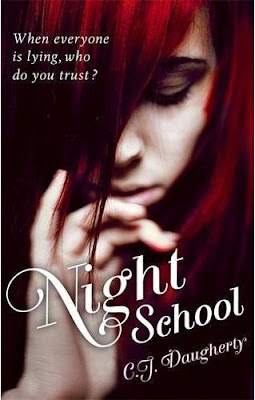 Sometimes school can be murder. . .

Allie Sheridan's world is falling apart. She hates her school. Her brother has run away from home. And she's just been arrested.

This time her parents have finally had enough. They cut her off from her friends and send her away to a boarding school for problem teenagers.

But Cimmeria Academy is no ordinary school. It allows no computers or phones. Its students are an odd mixture of the gifted, the tough and the privileged. And then there's the secretive Night School, whose activities other students are forbidden even to watch.

When Allie is attacked one night the incident sets off a chain of events leading to the violent death of a girl at the summer ball. As the school begins to seem like a very dangerous place, Allie must learn who she can trust. And what's really going on at Cimmeria Academy.

Review:
Ever since her brother disappeared a year and a half ago Allie has been taking more and more drastic actions to get her parent's attention and as a way of pushing her grief and worry to one side. Now she has taken one too many risks and been arrested for the third time and her parents are at their wits end. Before she can blink Allie finds herself packed off to a distant boarding school. Life at Cimmeria is very different to any other school she has ever been to, the lessons are hard, the rules are strict and punishments for breaking them are severe. Allie thought she would hate the restrictions that the school has in place but as she settles in she starts to appreciate her new life and quickly makes friends. Not everyone is pleased to have her there though and when mysterious events start to occur Allie finds herself falling victim to a nasty hate campaign. Who is really behind the incidents though and just what are the students who are members of the mysterious Night School actually doing in their spare time?

I have to admit that when I first picked up Night School I was expecting a fairly average story with some kind of supernatural creature (probably vampires) causing trouble at the boarding school. I thought I'd enjoy it but I didn't think it would particularly stand out from the many other paranormal books I've read that have a school setting. I'm very glad to say I was wrong and Night School was much more than I thought it would be. The story has a dark, Gothic feel to it and it really kept me on my toes trying to guess what was going on. There were so many plot twists and a lot of things took me by surprise. I loved the atmosphere of the book and I didn't want to put it down because there were so many questions I wanted answers to.

Allie is quite a messed up character when she arrives at the school, she comes across as quite self centred and very uncaring towards her parents but as you get to know her you quickly see how lost and lonely she is. Christopher wasn't just her brother he was also her best friend and his disappearance devastated her. She doesn't really have anyone to turn to now that he's gone so she started taking stupid risks and getting into trouble just to get some kind of reaction from her parents and to make herself feel more alive. It backfires in the worst kind of way when she is sent miles away from home to stay at boarding school but that is actually the best thing that could ever have happened to her. The rules and regulations are just what she needed to feel secure and the fact that she quickly finds new friends is a bonus. It didn't take me long at all to really like Allie and I was right there with her when people started giving her a hard time - I really wanted to step in on her behalf on occasions but she was more than capable of standing up for herself. I was glad to see that she had a few loyal friends who really stuck by her and gave her the support she needed though.

With two potential love interests I was a bit worried that we might end up with another messy love triangle but I'm really hoping that won't be the case. I didn't like Sylvain from the very beginning but after certain things he did I grew to really hate him. He did try to redeem himself a little towards the end but he's going to have to work a hell of a lot harder than that to make me like him. One thing I will say is that if Allie even thinks about giving him a second look I'll have to give up on the series because there are some things that I just can't put up with. Carter on the other hand was fab, he was cold and distant towards her in the beginning but they gradually become friends and when they start working together mutual respect starts to shift into something more. I'm definitely team Carter and am looking forward to seeing what happens next between them.

After the action packed ending full of shocking revelations I can't wait to get my hands on the sequel Legacy and thankfully I don't have long to wait. I'm impressed with C.J. Daugherty's debut and have a feeling that this series is just going to get better with each instalment. If you haven't read this book yet then I'd recommend getting your copy now - then you can join me reading the second book in January!