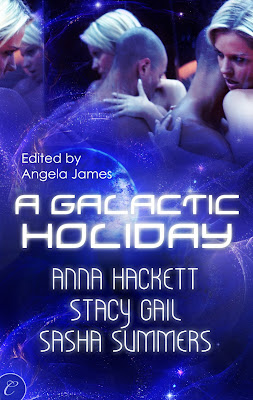 A detective who refuses to modify her body teams up with her cyborg rival to track down a burglar who is putting toys into homes. A solitary ice miner finds love and friendship while stranded on the surface of Galileo. And two hardheaded negotiators put their differences aside to evade an assassin and save their planets. Enjoy these visions of Christmases yet to come with three science-fiction novellas from Carina Press.

For more information about any of these authors click on their names below to visit their websites:
Stacy Gail
Sasha Summers
Anna Hackett

A Galactic Holiday is a fantastic anthology containing some great Christmas themed science fiction romance stories and is great for anyone who wants to get into the holiday mood. I have to admit that the main reason I wanted to read the anthology was for Stacy Gail's story, I loved her contribution to the Carina Press steampunk Christmas anthology (A Clockwork Christmas) last year so was looking forward to reading more of her work. The other authors are both new to me but I will definitely be keeping an eye out for stories from both of them in the future. I really love the science fiction theme to this anthology and it's definitely made me want to read more books in this genre in the future.


How the Glitch Saved Christmas by Stacy Gail 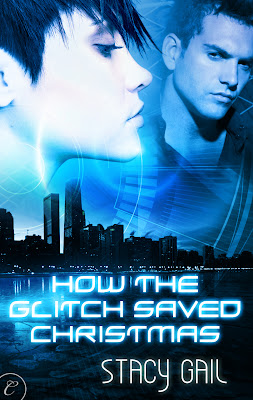 Wicke has had his eye on Reina for ages, and as the two of them hunt down the benevolent burglar, they take turns warming each other with body heat in the subzero Chicago winter. Despite professional friction and their opposing views on bod-modding, Reina soon has to admit that she and Wicke are perfect for each other.

But when they track down their philanthropic quarry on Christmas Day, an unexpected glitch in a homemade android brings out Reina’s emotional side, and she and Wicke must decide whether love between a Neo-Luddite and a "walking toaster" is a gift that either of them can give.

Review:
Reina is the only fully human detective left in the Chicago police department having refused to undergo body modifications to enhance her performance. Her refusal to accept these upgrades have seen her go from the most celebrated detective in her department to having everyone constantly belittle her and demote her while they try to change her mind. The last thing she wants is to be forced to work with the department bod-mod poster boy Edison and have him throw her failure back in her face. Edison was the first detective to have the bod-mods done and has since stolen her spot at the top of the station hierarchy so she is determined to keep him at a distance but at the same time she has a need to prove that she is still just as good as him. As they start work on the most bizarre burglary case ever they find it hard to keep each other at arms length but can someone as anti bod-mod as Reina really fall for someone who has had as many upgrades as Edison?

I really enjoyed this novella set in a futuristic version of Chicago. It was interesting to see how the use of robotics had spread into upgrading humans too and both the advantages and disadvantages that this gave the modified detectives. It was great to see how well Reina and Edison worked together, their different skills complimented each other perfectly and you could see that they had both made the right decision for them when it came to the bod-mods. They also have fantastic chemistry and were able to quickly warm each other up from the Chicago subzero temperatures! I'm very curious to see if this will end up being the beginning of a series, there would be a lot of scope for Stacy Gail to go into further detail about the way Reina has been ostracised by the other police officers for her refusal to get the bod-mod upgrades. I would have liked to see her be able to prove to everyone that she was still a damn good detective and that is something Edison seemed determined to help her show people. If this does turn into a series I will definitely be picking up any future stories but even it it doesn't it was still a very enjoyable read and one I'm happy to recommend. 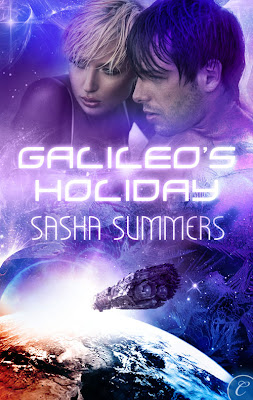 Ice miner Riley works alone in the depths of space, and that’s the way she likes it. She’s proud of her independence, and when her ship gets destroyed by raiders on the icy surface of Galileo, she’s not sure she wants to rely on rakish trader Leo and the kindness of a band of settlers to survive.

Despite her attempts to keep her distance, it’s not long before Riley warms to the family atmosphere of the settlers’ station. As Galileo’s Holiday approaches and she develops feelings for the handsome, charming Leo, she questions whether she really wants to remain alone.

But Leo is hiding cargo the raiders want, and when they come back for it, everyone on the small station is in danger. Riley will risk anything to protect her new friends—because if the raiders succeed, the choice between Leo and a life alone won’t be Riley’s to make.

Review:
Riley has spent her whole life working as an ice miner, she has her own ship and spends the majority of her time alone but she is happy to follow in the footsteps of her mother and grandmother who were both miners before her. Everything changes when Riley is trapped on the planet Galileo after raiders destroy her ship. Rescued by trader Leo and welcomed into the nearest space station Riley starts to realise just what she has been missing out on by spending so much time alone. When the raiders come back, searching for Leo and his cargo Riley must risk everything if she wants to keep her new friends safe.

Riley is strong, intelligent and fiercely independent but at the same time she is also quite vulnerable and naive when it comes to interacting with other people. She is so used to being alone that she doesn't quite know what to make of the banter that goes on amongst the settlers at the station but it doesn't take her long to fall into a happy routine. Considering she has just lost everything she has ever known she is in need of a little TLC and that is exactly what she is offered by the settlers as they welcome her into their group. Leo hasn't always lived his life on the right side of the law but he is trying to make up for it now and I liked the way he fell so hard for Riley. Neither of them ever expected to find love but when they do they fall hard and fast. Galileo's Holiday was a really sweet story and I enjoyed the futuristic take on the holiday celebrations, I'll be looking out for more by Sasha Summers in the future. 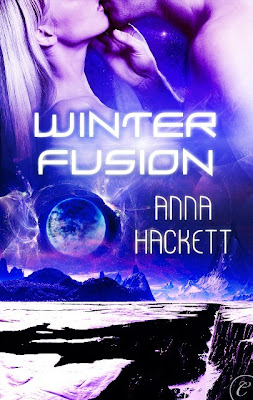 Ex-space marine Savan Bardan survived the Galactic Wars to become the most ruthless trade negotiator in the galaxy. His planet needs energy to survive, and he’ll do anything to close the deal for the Perman fusion crystals that can provide it—even if it means seducing his beautiful, infuriating opponent, a rival icier than her planet.

Perma’s top negotiator, Brinn Fjord, lost her father when Savan delayed her planet’s Trade Guild membership years ago. She hates the handsome Rendarian and the planet he represents. She’s determined to finish the deal and get rid of him as quickly as possible, so she can celebrate the holidays.

But soon the rival negotiators are in a fight for their lives. Besieged by mysterious accidents and unforgiving weather, Brinn and Savan have no one to depend on but each other. As they put the past aside, they uncover a desire hot enough to melt ice, and Brinn discovers a secret that may keep them apart.

Review:
Savan is a ruthless negotiator who will stop at nothing to get the fusion crystals his planet Rendar needs to survive but this is going to be his toughest negotiation yet. To make a deal he is going to have to convince Brinn, Perma's top negotiator, to talk to him and he knows how much Brinn hates him and Rendar for preventing them from joining the Trade Guild sooner. Savan had his reasons for delaying Perma's membership but all Brinn knows is that it meant they were unable to trade for desperately needed medicines and it cost thousands of lives - including her father's. When Brinn and Savan come under attack on their way to visit the ice mines they must work together to survive in a hostile environment - especially when they have a trained assassin on their tale just waiting for the chance to finish the job he started.

I really enjoyed the Winter Fusion novella, Anna Hackett has created a detailed and interesting future and I'd love to re-visit these worlds and find out more about them. As a planet Rendar was so focused on getting access to more and more technology that they have destroyed their environment, the people there more interested in financial success and becoming the best of the best than they are in the idea of family and home. It sounded like a miserable place to live and it was a nice reminder to be thankful for the smaller things in life. Perma on the other hand couldn't be more different, the planet is a brutal place to live with incredibly low temperatures and a lot of snow and ice but the people there are much more relaxed and take time out to enjoy life with their loved ones. They are also much more careful to protect their environment which I think added an important message to the story. This isn't something that is pushed down your throat though, the author hasn't used the story to stand up on a soapbox, it was just a nice extra layer. I really enjoyed watching the romance that develops between Savan and Brinn, on the surface they are complete opposites but really they are both looking for the same things from life and are very well matched. If you like a good enemies to lovers story then you're sure to enjoy this one!