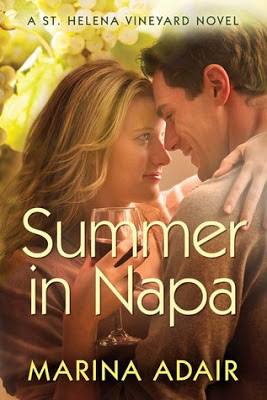 When Alexis “Lexi” Moreau caught her husband, Jeff, sampling the sous-chef’s more intimate wares in their New York restaurant, she ran—all the way back to her hometown of St. Helena, California. Six months later, Lexi has no husband and no restaurant. But she does have a three-step plan: First, convert her grandmother’s bakery into her dream bistro. Second, ignore Grandma’s matchmaking attempts. And third, avoid Marco DeLuca, her ex’s commitment-phobic, distractingly sexy best friend.

In school Lexi was off-limits for Marco. After all, she was his buddy’s girl. But she’s still as smart and as gorgeous—and apparently as immune to his charms—as she used to be. Yet the simple fake romance they agree upon to dodge Lexi’s grandmother’s matchmaking plans soon turns deliciously complicated. And the sultry summer might bring together all the right ingredients for Marco to win the only woman he’s ever wanted.

St Helena Vineyard Series:
Kissing Under the Mistletoe
Summer in Napa
Autumn in the Vineyard (October 2013)
Future titles and release dates to be confirmed

Review:
Lexie's dream was always to help her grandmother turn the family bakery into a bistro but instead she followed her husband to New York and helped him set up his dream restaurant. Then she caught her husband having an affair with their sous chef and had her heart broken. Leaving New York behind she has returned home to lick her wounds and to finally put her own dreams first. The last thing she wants is to meet another man so she is horrified by the number of dates her grandmother has lined up for her. When Marco, her friend from high school, offers to be her pretend boyfriend so that she can focus on creating a new menu for the bistro she is happy to take him up on the offer just to avoid the rest of the dates her grandmother has set up. Marco always had a thing for Lexi but when she started dating his best friend she became strictly off limits, now, even though she is divorced it goes against the man code to even think about dating her. Keeping things platonic is easier said than done though, the chemistry between them is hot enough to burn and she is one temptation he has trouble walking away from.

I loved Kissing Under the Mistletoe when I read it last year so Summer in Napa has been at the top of my wish list ever since and I'm happy to say that I loved this story just as much. When I'm in the mood for a sweet, sexy romance that has me laughing out loud one minute and swooning the next Marina Adair always delivers and I can't wait to carry on reading this series. I love this kind of small town romance, one where everyone knows each other's business and the whole town is sticking their noses into the couple's budding relationship. One of the best things about this series is the trio of meddling grandmothers who get up to such crazy things that it's hilarious to read about. I also absolutely love the banter between Marco and his brothers, they tease each other mercilessly but when it comes down to it they have each other's backs and anybody would be a fool to cross them.

Lexi is a fabulous character, she is still smarting from her ex-husband's betrayal and is embarrassed that she has come home with her tail between her legs but she doesn't let that stop her from chasing her dreams. Jeff didn't just cheat on her though, he is still causing her problems even after their divorce and Lexi is livid when she finds out what he has been up to. Things keep kicking Lexi while she is down but she just gets back up and carries on fighting. There are a few times when her insecurities get the better of her but that was completely understandable and between Marco and her best friend Abby they always gave her the push she needed. Marco was a swoon worthy hero, he has a reputation as a playboy but he isn't actually as bad as he seems and he has never lied to anyone or led them on. He went a bit wild after his parents died and his family still tend to think of him as the screw up he was as a teenager but in reality he is a hard working business man who takes his job very seriously. He didn't want to work in the family wine business but he has worked hard to open up his hotel and is determined to make a success of it. I really liked the way Lexi saw past his reputation and understood just how much effort he put in to his career. It was nice for Marco to finally have someone who believed in him and he offered her the same support in return. As much as I loved them both as individuals I liked them even more as a couple, they are so cute together and they really did make a great match.

I've already mentioned how much I loved their families and the other town characters but I can't forget to mention Marco's dog Wingman who added a lot of humour to the story. It was great to catch up with Gabe and Regan from the previous book and we've also been given a glimpse at future couples. After checking the author's website I was excited to see that Nate and Frankie are next, they have already shown how much they love to hate each other and I'm expecting their chemistry to be off the charts. The St Helena Vineyard series is so much fun to read and although the books do work well as stand alone stories I can highly recommend both instalments so far. Marina Adair is right up their with my favourite small town contemporary romance authors and I have to say that I'm enjoying this series as much as Jill Shalvis's Lucky Harbor books which is huge praise from me because I LOVE that series!