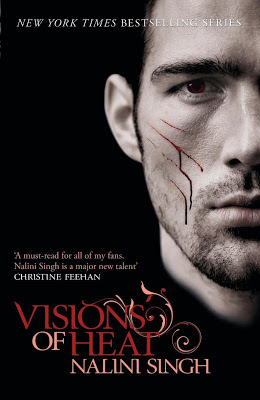 Used to cold silence, Faith NightStar is suddenly being tormented by dark visions of blood and murder. A bad sign for anyone, but worse for Faith, an F-Psy with the highly sought after ability to predict the future. Then the visions show her something even more dangerous - aching need . . . exquisite pleasure. But so powerful is her vision, so fragile the state of her mind, that the very emotions she yearns to embrace could be the end of her.

Changeling Vaughn D'Angelo can take either man or jaguar form, but it is his animal side that is overwhelmingly drawn to Faith. The jaguar's instinct is to claim this woman it finds so utterly fascinating and the man has no argument. But while Vaughn craves sensation and hungers to pleasure Faith in every way, desire is a danger that could snap the last threads of her sanity. And there are Psy who need Faith's sight for their own purposes. They must keep her silenced - and keep her from Vaughn . . .

Review:
Faith is a rare F-Psy, someone with the ability to see the future, her visions have used to predict the stock market since she was only 3 years old which has made the NightStar Clan very wealthy. Recently her visions have taken a darker turn and she seems to have become psychically linked with a murderer seeing nothing but death and destruction. She knows that she is on the verge of madness and that if the Psy Council find out she will end up institutionalised because her skills are too valuable for her mind to be wiped. Faith has no choice but to trust in the visions she sees of Vaughn, a sexy jaguar who is a member of the DarkRiver pack, who she is sure can help her track down the murderer and prevent more deaths. Vaughn's instincts tell him that Faith belongs to him but every touch brings her closer to an emotional overload that could send her over the edge. Vaughn trusts his instincts though and is determined to find a way to break through Faith's emotional barriers and convince her to take a chance on a future with him.

Visions of Heat is the second instalment to the Psy-Changeling series allows us to find out even more about the different Psy abilities and the world that Nalini Singh has created. As much as I love the Guild Hunter series I've always been fascinated by different psychic powers and I'm really enjoying learning more about the Psy. The way they have trained themselves to block out any emotions makes them come across as an incredibly cold race, they don't seem to care about anyone or anything and use logic to make their decisions. Faith has been even more sheltered than most Psy, her abilities are incredibly powerful but they make her more vulnerable to emotional overload than most other Psy. She has spent most of her life alone and has rarely had any form of physical contact with anyone apart from for medical reasons. Her horror over the visions she is seeing has caused her to seek help from Vaughn and the DarkRiver pack, she knows that Sascha is no longer part of the Psy-Net and believes that she is the only person who can help her retain her sanity.

Vaughn is the only jaguar amongst the leopards of the DarkRiver pack but they are his family and he will do anything to protect them. He is initially wary of Faith and worries that she could bring trouble do their door but there is something about her that calls to his jaguar side and he is unable to resist her. His animal instincts crave the comfort of touching her but he has to be careful not to overload her senses. I love the way Vaughn is constantly pushing Faith's boundaries, he keeps taking her to the edge but he knows better than she does what she is capable of and although he pushes her further than she thinks she can go he never takes things too far. Vaughn is a sexy alpha who is more in touch with his animal side than his human one and he certainly ticked all my favourite hero boxes. I think it is the fact that he is so different to Faith that makes them work so well as a couple, they both seem to know exactly what the other one needs and they find a way to provide it for them. Vaughn really helps Faith come to terms with her visions and he proves to her that she can cope with more than she ever would have guessed. I really enjoyed watching her grow into a confident woman as she learns more about her ability and how to control it.

It was great to catch up with Lucas and Sascha several months on from when they met in Slave to Sensation and see how they are getting on as a couple and I loved spending more time with the DarkRiver pack and getting to know some of the other characters a little better. The more I learn about the Psy-Changeling world the more intrigued I am and I have a feeling that this is going to quickly turn into one of my favourite paranormal romance series. There is something about Nalini Singh's writing style that pulls you into the story and makes you feel so connected to her characters and I can't wait to see where the series goes next.