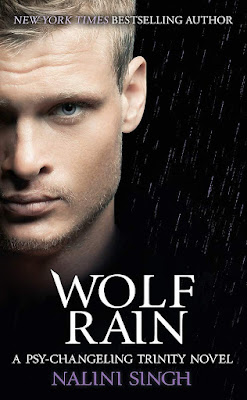 The fate of millions of lives hangs in the balance in this new Psy-Changeling Trinity novel from New York Times bestselling author Nalini Singh...

Kidnapped as a young girl, her psychic powers harnessed by a madman, Memory lives a caged and isolated existence . . . until she comes face-to-face with a wolf. Labelled an empath by her bad-tempered rescuer, Memory knows that her 'gift' is nothing so bright. It is a terrible darkness that means she will always be hunted.

But Memory is free now and she intends to live. A certain growly wolf can just deal with it.

Alexei prefers to keep his packmates at bay, the bleak history of his family a constant reminder that mating, love, hope is not for him. But Memory, this defiant and fearless woman who stands toe-to-toe with him awakens the most primal part of his nature - and soon, he must make a choice: risk everything or lose Memory to a murderous darkness that wants to annihilate her from existence . . .

Review:
As much as I've enjoyed meeting the bears and spending time underwater with Blacksea in the last couple of books (and I am really hoping we'll get to spend more time with ALL of them!) I was still really excited that Wolf Rain would take us back to where it all began with the SnowDancer pack. I can't help it, I've loved this series for such a long time that spending time with the wolves (and the cats of DarkRiver) just feels like coming home and it was so wonderful to catch up with all the familiar faces.

We've met Alexi before, he's one of Hawke's lieutenants and is a powerful member of the pack. Strong but caring and very protective of the ones he loves, he holds himself at a distance from the others due to some dangerous family history. He has good reason to fear the future but meeting Memory gives him a reason to fight for what he wants. Memory is a brand new character, she's a Psy who has been held captive for decades and although that would have sent many people completely insane she's a survivor who made it through. She isn't like a lot of the Psy we've met before, she never managed to achieve Silence so she's much warmer than I expected. I'm not going to say much about her abilities but she's always believed they are a curse and that she's evil but working alongside the empaths and the Arrows she starts to realise that she is capable of more than she ever imagined.

These two have a lot going against them, the least of which is that her captor is hunting her determined to get her back under his control, but they both know what they want and they're willing to fight for it. One of the things I love most about Nalini Singh's stories is that she never manufactures unnecessary dramas, instead she focuses on creating well rounded characters with believable motivations. It is always so easy to love her characters and even the side characters who have never been in the spotlight feel like old friends.

It goes without saying that her world building is phenomenal too, the Psy-Changeling world is so full of depth that it's hard to believe it isn't a real place. I love the way the balance has been changing between the changelings, humans and psy since the fall of silence and that the different groups are starting to realise how much they all need each other. Things was always much easier amongst the changelings and humans but the psy are now learning so much more about themselves and the others.

As well as being a fabulous romance Wolf Rain really moves the overarching plot forward too and I can't wait to see where the story takes us next. Nalini Singh's books just never disappoint!

Source: Received from the publisher exchange for an honest review