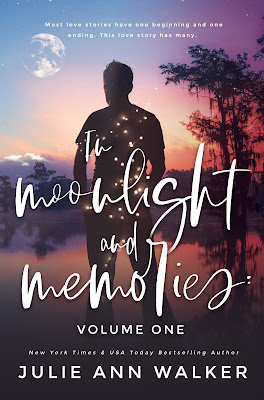 From NYT and USA Today bestselling author Julie Ann Walker comes an epic tale of sacrifice, friendship, and the awe-inspiring power of love.

Maggie: Ten years ago, Cash Armstrong stole my heart. Then he promptly joined the army—dragging my best friend with him—and left me crying on the front porch in a red sequined prom dress. Now he's back. They're both back. Cash, the one who still has my heart. And Luc, the one who saved my life.

Cash: How do you know if you’re at the end of the beginning or the beginning of the end? That's what I've been trying to figure out since a traumatic brain injury made me "unfit to serve." I'm back in New Orleans, and picking up the shattered pieces of my past means I must confront where my life's journey began... and where it all might end.

Luc: Long ago, Maggie May was mine. Not mine in the way you might think. She was mine because she was my only friend. Then Cash came along and we became brothers by something stronger than blood. We became brothers by choice. When tragedy struck, I was forced to make a decision that changed all our lives. I thought, after ten years, it was safe to come back home. I was wrong...

The “In Moonlight and Memories” trilogy debuts July 1st!

And always remember, “The greatest of loves can begin in the simplest of ways...” 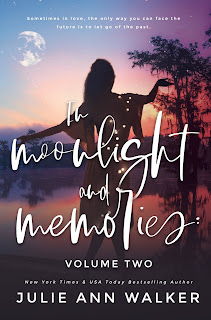 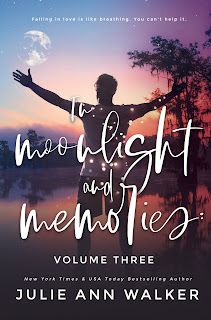 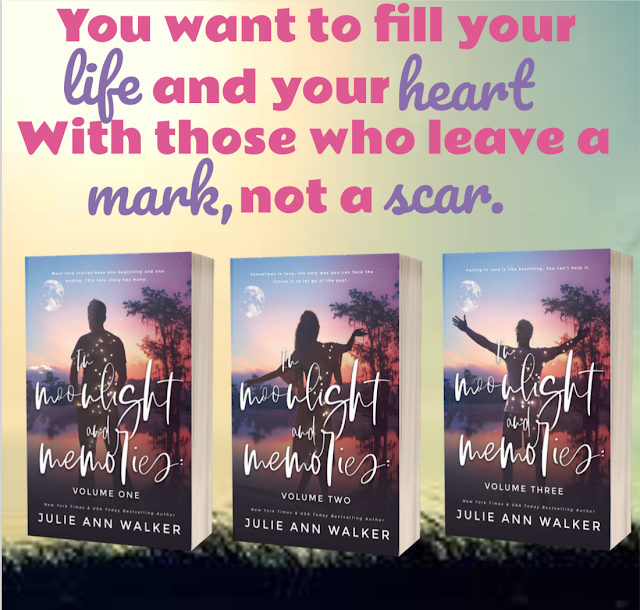 I try to put my ramshackle thoughts into an order that will make sense. But eventually, I'm forced to admit, "I can't figure out who's in charge of my life these days because it sure as shoot doesn't feel like me. I feel like a piece of flotsam on the ocean, being carried by the current, unable to adjust my path. Or worse, not knowing which path I would take even if I could adjust it."

"Let me guess," she says. "Cash is the current, and he's pulling you straight toward him?"

"Yeah," I admit. Then I quickly add, "And no. I mean, I definitely feel pulled toward him. No question of that. But it's not because of anything he's said or done. If anything, based on what he's said, I should feel the exact opposite."

"What do ya mean?" Jean-Pierre asks.

"I mean, when I asked him what he wants from me, he said he doesn't want anything."

They exchange a glance.

"I know, right?" I lift my hands and let them fall. "But it's just that... I don't really believe him. Sometimes I swear I catch him looking at me like he used to. Then again, maybe I'm seeing what I want to see. A decade ago, my feelings for him bloomed into this huge tree, and I've spent the intervening years watering it and watching it grow instead of cutting it down and burning the stump."

"Do ya want to cut it down and burn da stump?" Jean-Pierre's eyes are intent on my face.

"I don't know," I admit morosely. "I can't see things clearly. I'm hoping y’all can help me. Do I open up my chest, take out my heart, and hand it to him knowing he might not want it? Or worse, that he might stomp all over it like he did the first time?"

Neither of them says anything to that. The only sounds to break the silence are the low, mournful moan of the breeze across the rooftops and another soft call from the whippoorwill.

Eventually, Jean-Pierre ventures, "Me, I don't know much, but I know dis. Love is supposed to cherish and support. It isn't supposed to disregard or disrespect. You want to fill your life and your heart with folks who leave a mark, cher. Not a scar."

The simple truth of his words cuts into me, sharp as a gator's tooth, and makes me wonder, Did Cash leave a mark or a scar?

Thinking back on all the times he was so sweet to me, like when I was sick with the flu and he came by Aunt Bea's house to leave a package of gummy bears—my favorite candy—with a note that read, "Life without you would be un-BEAR-able, so get better soon." Or the time, exactly one year after we met, that he taped a sign to my locker. In big, black Sharpie for the whole school to see, he'd written, "Cash Armstrong has loved Maggie Carter for 365 days." I would say, unequivocally, that he left a mark.

Then I think back on the night he left...

Yep. That is definitely a scar.

"Uh-oh." I wince. "Anytime you start a conversation that way, I know I'm in for it."

Her expression is like the woman herself—kind. "You tend to spend a lot of time living in the past and putting a lot of emphasis on what was. I think maybe that stops you from seeing what is." 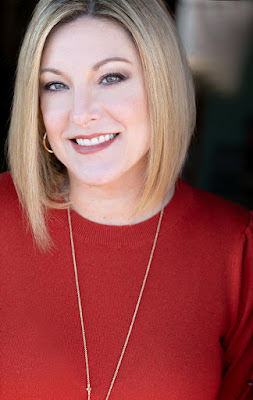 A little about Julie…

Born in Tulsa, Oklahoma, Julie grew up in a house full of women – she has three older sisters. As you can imagine, there was no lack of drama… or romance. Her mother enrolled her in a book club as soon as she began to read and it was the small spark that ignited her voracious appetite for the written word.
Because of Julie’s early immersion in literature, she found writing came quite naturally. In high school, she won multiple writing contests and was the proud senior editor of The Tiger’s Tale – her school newspaper.

During her college years, however, she longed for a challenge. “Reading and writing felt like second nature to me, so I looked for a way to flex my mental muscles,” she recalls. After receiving a Bachelor of Science degree, Julie began teaching advanced high school mathematics.

“I loved working with the students and facing the challenges of the classroom, but I longed for the occasional snow day when I could race to the local book store, buy two or three new novels, and curl up in front of the fire to read.”

It wasn’t until a fortuitous move to Chicago that Julie once more returned to her first passion.
Now Julie loves to travel the world looking for views to compete with her deadlines. When she’s not writing, she enjoys camping, hiking, cycling, cooking, petting every dog that walks by her, and… reading, of course!