Review: The Beyond - Chloe Neill 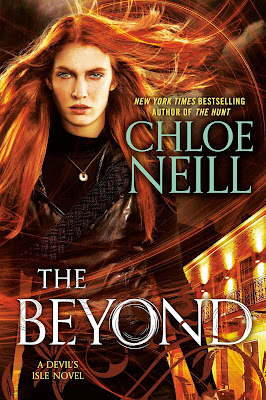 Sensitive Claire Connolly must journey to another world in the electrifying fourth installment of Chloe Neill's post-apocalyptic urban fantasy series.

It's been a year since the Veil between the human world and the world Beyond was torn apart, and war began again. Sensitive Claire Connolly and bounty hunter Liam Quinn have been helping their human and paranormal allies fight back against the ravaging invaders and save what's left of New Orleans.

But a new enemy has arisen, more powerful than any they've seen before, and even Devil's Isle cannot hold her. . .

When Claire learns of a new magical weapon—one built by paranormals themselves—she knows it could turn the tide of war. But to reach it, she and Liam will have to cross into the Beyond itself. In a world full of hostile magic and dangerous foes, she'll have to channel the powers she once kept hidden in order to survive. New Orleans hangs in the balance, and the storm is growing closer...

Review:
It's been a year since the veil fell and New Orleans has completely changed, many of the survivors have left but those who remain are stubborn and determined to protect what's left of their city. The war has taken it's toll though and when a dangerous new enemy comes looking for revenge Claire and her friends are going to have to take huge risks to save the home that they love.

I'm really sad that The Beyond is the final book in this series, I've really enjoyed spending time in this world and getting to know the characters so I was honestly hoping that we'd get a few more books. Having said that I'm glad that it ended on a high note. Claire has grown a lot since the first book, she's much more confident now and has better control of her abilities. In fact she's no longer scared of her magic and instead has learnt to wield it with precision. She's also learnt to appreciate life, she celebrates the small things like spending time with friends and family and is very focused on protecting the people she loves. Her relationship with Liam is also going well, they've had their problems in the past but they're now much more secure in their love and are working really well together as a team.

I don't want to give away much of the plot but I will tell you that this is the first book that lets us take a peek at what is on the other side of the Veil which I really loved. There was a lot of action and we get to see all of our favourites fighting together for an excellent cause. I may be sad that the series has come to an end but I'm happy with the way things wrapped up, especially for Claire and Liam. I'm still going to hope that Chloe Neill decides to revisit this world in the future but in the meantime I'll look forward to more from the Heirs of Chicagoland!