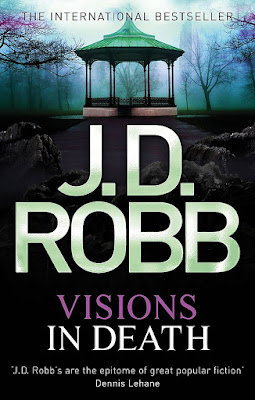 She sat, her hands folded tightly together on her lap. She breathed in and out once. 'He took her eyes . . .'

As Elisa Maplewood walks her dog in the still twilight of Central Park, she is oblivious to the man lurking behind her. Later that night Lieutenant Eve Dallas gets a call: a young woman's body has been found on the rocks, wearing nothing but a red ribbon. And, more horrifyingly, she is missing her eyes.

Eve's investigation is thrown off course when an exotic and headstrong psychic, Celina Sanchez, insists she saw the murder in a vision. Eve dismisses her, but as the murders become more brutal, the visions more vivid, and Eve more desperate, Eve and Celina form an unstoppable team.

Review:
I feel like all of my reviews for this series have just turned into me raving about how good it is but seriously, how often do you get nineteen books into and STILL excitedly devour the books as fast a possible? I can't think of any apart from this one where I've already read so many books but am excited that I'm not even halfway through the currently published titles!

Of course this wouldn't be an In Death book if Eve wasn't on the hunt for a psychotic murderer and this one is taking great pleasure in beating and raping his victims before cutting out their eyeballs for souvenir. Eve is always willing to do whatever it takes to stop a killer but this time she's forced to try something she's never considered before when a psychic comes to her claiming to be seeing visions of the deaths. She's extremely sceptical about the whole thing but the psychic has information that only the murderer should know so Eve is forced to at least consider using her as a resource.

As much as I enjoy the murder investigations (and this one had a doozy of a twist at the end!) it's really the characters that keep me coming back for more. I've gushed many times about how much I love Eve and Roarke as a couple and nothing has changed that but I also enjoy seeing their friendship circle grow as they both learn to let others into their inner circle. Not such a big deal for Roarke but definitely something very new for Eve. It's been hilarious watching Eve deal with the fact that her bestie Mavis is pregnant, she's so totally out of her comfort zone whenever anything pregnancy related comes up and this book has some absolute laugh out loud conversations with Eve, Mavis and Roarke.

I also really respect the friendship that has developed between Eve and Peabody, Eve tried so hard to keep her distance but it's been impossible. Eve's world is rocked to the core when Peabody becomes a target and there were some really emotional scenes because of that. This book was one of my favourites in the series so far (and yes I realise I seem to be saying that with pretty much each book I read!) and I definitely can't wait to dive into the next one. If you haven't started this series yet don't let the number of books put you off, it really is worth reading!