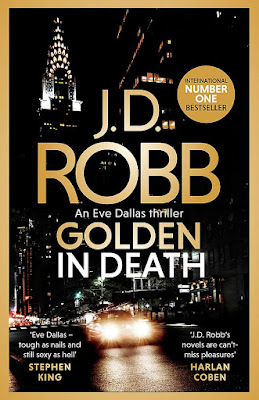 When Kent Abner - baby doctor, model husband and father, good neighbour - is found dead in his town house in the West Village, Detective Eve Dallas and her team have a real mystery on their hands. Who would want to kill such a good man? They know how, where and when he was killed but why did someone want him dead?

Then a second victim is discovered and as Spring arrives in New York City, Eve finds herself in a race against time to track down a serial killer with a motive she can't fathom and a weapon of choice which could wipe out half of Manhattan.

Review:
I can't quite believe that I've actually caught up with this series, let alone that fifty books (plus multiple novellas) in and I'm still totally in love with this world and the characters. That's some kind of magic right there, but come on this is J.D. Robb aka Nora Roberts, queen of romance, so it probably shouldn't be that surprising! I was intimidated by the length of this series and put off starting it for a long time but once I got hooked in I couldn't stop reading and I'm amazed by how quickly I got through these books. I'm not sure what I'll do with myself while I wait for the next one to publish, perhaps I should start a reread?

Anyway, if you're a fan of this series then you'll already know exactly what to expect from Golden in Death, it has the same humour, the same brilliant and often quirky characters, the futuristic gadgets and the weird murders that Eve has to work her butt off trying to solve. It has strong friendships, one of my favourite fictional romances and my ultimate book boyfriend. All the magical ingredients that will keep me coming back for more even if there are another fifty books published in the future. I'm definitely not done with this world yet.