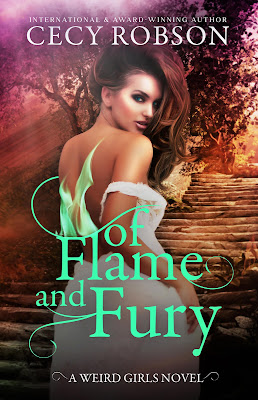 Taran Wird, the loudmouth mistress of flame and lightning, didn’t want to attend the formal gathering of the supernatural elite. She did so only to help to unite the supreme beings in attendance in one common goal: protecting Taran’s sister, Celia.

Celia is pregnant with alpha werewolf Aric Connor’s child, the same child prophesized to save the world from uprising evil. Evil wants this child dead before he is born and, more importantly, before he can grow strong enough to stop it.

Taran and her werewolf lover, Gemini, put plans in place to protect Celia. Master Vampire Misha Aleksandr and his clan also swear their allegiance to Celia and vow to keep her from harm. The witches even cast protection spells around the manor to curse anyone with malintent who enters. Nothing was supposed to go wrong, except everything did.

Creatures that shouldn’t exist stalk the grounds and invade the premises, and every curse meant to shield the guests turns against them. No one counted on the powerful being who arrived uninvited. But he’s here, manipulating the magic enclosing the estate to work in his favor.

As body counts rise and allies become enemies, chances are Celia won’t survive the night. But evil never counted on how hard Taran Wird would fight, even at the expense of her life.

Review:
With Celia heavily pregnant with the child that is supposed to save the world the whole supernatural community, from the Pack to the vampires and even the witches, have come together to keep her safe. Their enemies are converging though and they are equally determined to kill Celia before the child is born. This battle will be the fiercest one yet and Taran will do anything to protect her sister, even if it means making the ultimate sacrifice.

Of Flame and Fury is the final book of the Weird Girls series told from Taryn's point of view but I don't believe it will be the last book in the series. I'm not sure which sister will be up next but I'm already looking forward to continuing the adventures! This book was pretty much non stop action from beginning to end, their enemies are out in force and its going to take everyone working together if they want to save Celia. Taran has to make some difficult decisions but alongside Gemini, Aric, Shayna and Emme they will never give up.

While I loved the battle scenes in this book I have to admit I would have liked some more quieter moments where we just got to spend time with the characters we know and love. There was less humour in this book because there was so much danger and I missed that a little here. It was still a fab instalment though and I'm more eager than ever to get to Emme and Shayna's stories so I hope we don't have to wait too long for the next one!