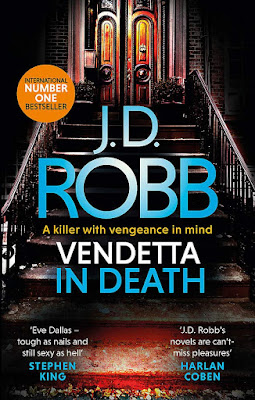 When a family man is tortured, killed and left in front of his home for all the world to see, Eve Dallas knows she is on the hunt for a particularly dangerous killer. But death uncovers secrets and the killer leaves a note revealing the victim to be far from the family man he appears.

As Eve works to link victim and killer, another body is found. Another man with a dark and murky past.

The race is on before the killer strikes again but Eve must wrestle with her demons and her conscience as she decides whether she really wants to protect men who may just deserve everything they get...

Review:
Eve's latest victim, an average family man who was tortured and left on his own doorstep, may not be quite as innocent as his family believed. In fact, the more Eve finds out about him the more she wishes she'd been able to meet him before he died so that she could have locked him up in a cage. The killer may be targeting men who have lied and cheated but the level of torture she's dishing out is quickly escalating and these men deserve prison far more than they deserve to die. Eve hates having to stand for abusers but the killer is turning them into victims and Eve will always work towards justice for those in her care.

I always find it interesting when Eve has a good idea who the killer is but isn't sure how to prove it. She has spot on instincts but that isn't enough to get warrants unless she has a very good reason for her suspicions and that is a sticking point in this case. She always has a particularly hard time of it when the victims she's standing for are themselves abusers but we really get to see how far she's come in this book because it doesn't affect her as much as it would have in the past. Yes it brings back memories but she's more open with both Roarke and Mira about these things now and is therefore able to work through them far quicker than she did earlier in the series.

This book has appearances from all our favourite characters and I particularly like the friendship that is developing between Roarke and Nadine's new rockstar boyfriend. Roarke actually had a lot of stand out moments in this book and there was a lot of humour, especially surrounding an announcement made by Mavis. It's good to see changes within the side character's lives and I really hope we're going to see more of Peabody and McNab's relationship soon, I want them to take the next step or even to just see more of them outside a work environment. I'm still loving this series though and I'm not quite sure what I'll do with myself when I finish the next book and have to start waiting for more to be published.