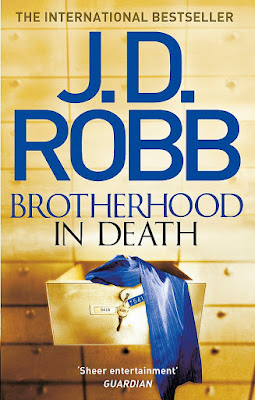 Edward Mira is a powerful man, with a lot of enemies. But when the former senator is violently abducted, Lieutenant Eve Dallas suspects his kidnap is more personal than political. Someone is seeking justice; the bloodier the better.

Edward's cousin Dennis was injured during the abduction - and that makes things very personal for Eve and her husband Roarke. Dennis is a beloved friend, married to NYPSD's top profiler Charlotte Mira.

But as Eve delves deeper into the case, dark secrets emerge that could tear the family apart. Edward Mira has friends in high places - and they all seem to be hiding something. As her investigation takes a shocking turn, Eve finds that not all victims are innocent, and that some bonds are forged not in friendship, but in blood.

Review:
Charlotte and Dennis Mira have become almost surrogate parents to Eve so it's no wonder she's the first person they call when Dennis is attacked and his cousin is kidnapped. Eve doesn't usually work kidnapping cases but as time goes by with no ransom notice they all become increasingly concerned that things are about to take a darker turn. Edward Mira is a retired judge and former senator, a powerful man with a lot of enemies to choose from and the more digging Eve does the less she likes him. As the bodies start piling up Eve uncovers some dark secrets from Edwards past and starts to wonder if some victims are only getting exactly what they deserve.

I love the Miras so I had a bit of a panic when Dennis was attacked and knocked unconscious, I would have been seriously unhappy if anything worse had happened to him! Luckily all the characters I care about are fine and as far as Edward Mira is concerned he deserves whatever punishment anyone cares to throw in his direction. It's not often I'm rooting for the murderer but this was definitely one of those times. Logically I know taking the law into your own hands isn't a good thing but I find it hard to blame them in these circumstances. I just wish Eve had found them sooner (or not at all!) so that they wouldn't be facing years in prison.

There was a lot of humour in this book as Peabody and Eve discuss the obsession a lot of old, rich men have with young, beautiful women but this story also tore at my heart imagining what the real victims of this situation had suffered. I like that Eve is more able to open up about her own past now too, she's had some great heart to hearts recently with Peabody and here she has one with Dennis too. It's nice to see how close she has become to Charlotte and Dennis and I'm glad the older couple have kind of unofficially adopted both Eve and Roarke. There is a lot in this series about found families and I think that's an important message.