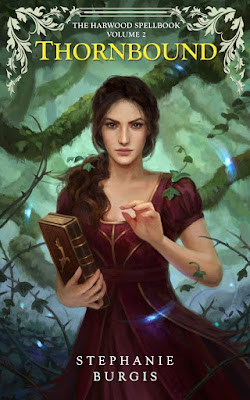 Cassandra Harwood scandalized her nation when she became the first woman magician in Angland. Now, she's ready to teach a whole new generation of bright young women at her radical new school, the Thornfell College of Magic…

Until a sinister fey altar is discovered in the school library, the ruling Boudiccate sends a delegation to shut down Thornfell, and Cassandra’s own husband is torn away from her.

As malevolent vines slither in from the forest and ruthless politicians scheme against her, Cassandra must fight the greatest battle of her life to save her love, her school, and the future of the young women of Angland.

Review:
Thornbound is the second book in the Harwood Spellbook series by Stephanie Burgis and we get to see Cassandra fulfilling her dreams as she opens the door to her new school for female magicians, the Thornfell College of Magic. Cassandra has had a lot of support from her family and her husband to open the school but it quickly becomes clear that a lot of people in positions of power are not happy with her attempting to change the status quo. It's so engrained in society that women are politicians while men are magicians and people are worried that rocking the boat with this new college will have all kinds of implications for the future.

Cassandra has never been one to back down from a challenge but when the Boudiccate send a team of inspectors who are essentially looking for excuses to shut down the college she knows she's really up against it. Then a sinister fae altar is found in the school library proving that someone has been dabbling in forbidden magic, and Cassandra's husband goes missing she starts to wonder if her own dreams are costing the ones she loves a price that she's not willing to pay.

I'm really enjoying this series and I hope that we're going to see more of Cassandra as well as the staff and students at Thornfell College in the future, I'm sure there are all kinds of adventures they could get up to! I think what I like most about this series is how it turns rules of society as we know them on their head, it's the men who have to watch their reputations as being alone with a woman could ruin their reputations and it its the women who have most of the power. But while it's fun to see that switch up I also like the way Cassandra and her students are challenging societal norms to follow their dreams. We've seen Cassandra and her brother both make choices that are looked down on from some quarters but they never gave up and now they're giving a whole new generation the ability to follow in their footsteps.

This series is brilliantly written with inspiring characters and a fun magical setting. Adding in the tricky Fae only adds to the excitement as you really never know what one of them will try next, especially if they're making dodgy bargains with people.