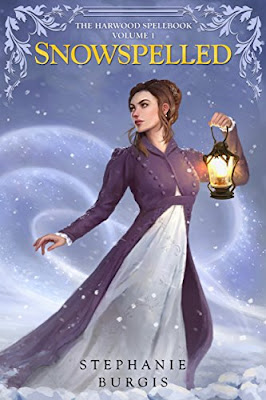 In nineteenth-century Angland, magic is reserved for gentlemen while ladies attend to the more practical business of politics. But Cassandra Harwood has never followed the rules...

Four months ago, Cassandra Harwood was the first woman magician in Angland, and she was betrothed to the brilliant, intense love of her life.

Now Cassandra is trapped in a snowbound house party deep in the elven dales, surrounded by bickering gentleman magicians, manipulative lady politicians, her own interfering family members, and, worst of all, her infuriatingly stubborn ex-fiancé, who refuses to understand that she’s given him up for his own good.

But the greatest danger of all lies outside the manor in the falling snow, where a powerful and malevolent elf-lord lurks...and Cassandra lost all of her own magic four months ago.

To save herself, Cassandra will have to discover exactly what inner powers she still possesses – and risk everything to win a new kind of happiness.

A witty and sparkling romantic fantasy novella that opens a brand-new series for adults from the author of Kat, Incorrigible, Masks and Shadows and Congress of Secrets.

Review:
Snowspelled is a novella set in 19th Century Angland, a kind of alternate history of our own world but with added fae and magic. Also this is very much a matriarchal society so if you've been looking for a feminist historical romance this will hit the spot perfectly!

It was a truth universally acknowledged that women were the more pragmatic sex; that was why we were expected to run the government, while the men attended to the more mystical and imaginative realm of magic.

In this world the women are the politicians, they make the rules and govern society while the men engage in more frivolous pursuits like magic. Cassandra Harwood's mother was a respected politician and Cassandra was expected to follow in her footsteps but she was always more interested in magic. It took hard work but she finally achieved her lifetime dream of becoming the world's first female magician, she had everything she wanted in her career and was engaged to the love of her life, fellow magician Wrexham, but when a spell went horribly wrong her world came crashing down around her. Now unable to use magic Cassandra has lost her purpose in life and she broke off her engagement because she didn't want to bring Wrexham down with her.

Several months later Cassandra finds herself trapped at a house party and completely out of her comfort zone surrounded by lady politicians, who should be her peers but aren't, and male magicians, who used to be her colleagues. To make matters worse Wrexham is stubbornly following her around trying to convince her to change her mind about their relationship and she also seems to have caused a bit of bother with the local elves that could cause a political nightmare.

Snowspelled was an utterly charming story by Stephanie Burgis, the world building was fabulous, full of diverse characters and feminist themes, the characters were fun to spend time with, there was a good amount of action and the romance was incredibly sweet. I was amazed how much the author managed to pack into a relatively small number of pages and I'm already looking forward to continuing the series.

Source: Won in a giveaway from the author