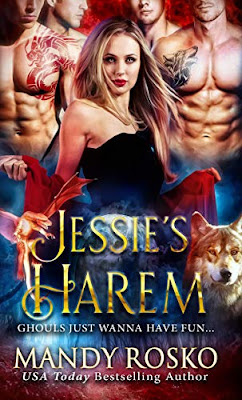 Jessie needs an army. One made up of the strongest alphas she can find if she is to kill a powerful sorcerer. The former master who created her.

She needs warriors, both wolf and dragon alike for this tricky mission. Easier said than done because dragons and wolves don’t get along! Luckily, Jessie’s a ghoul with succubus powers and she doesn’t have to look far to find a few scrumptious men who are the perfect candidates...

She just didn’t expect to have so much fun making the growly warriors do her bidding, though they don’t seem to mind when play time rolls around.

As things heat up in the bedroom, complications arise. The long history of fighting between dragons and werewolves is more challenging than Jessie expected. To ensure her freedom, and their cooperation, she might have to, horror of horrors, release them from her spell.

Trusting four angry warriors to stay on their own free will is a new experience for Jessie. Because, whether she wins her freedom or not, Jessie is used to a solitary, loveless life, and not convinced she’s worthy of four knights in shining armor.

Review:
Jessie has been used and abused by her husband for years, he even went so far as to turn her into some kind of ghoul / succubus type creature who has to feed on souls to stay alive. She's been planning her escape for a long time but she knows she can't battle him alone, so she sets out to get herself an army by ensnaring an alpha werewolf and an alpha dragon shifter using her succubus abilities. She ends up binding 4 men to her with a spell and promises them that if they are able to kill her ex she will give them back their freedom.

I'm having a hard time writing a review for Jessie's Harem because I don't have a lot of positive things to say about it. I struggled with Jessie as a character, she can be extremely childish, is always very selfish and very rarely thinks about anyone other than herself. She has zero problem with compelling others to do her bidding using her magic even while complaining that the same thing had been done to her and that's why her husband needs to die. The men were a little more likeable but they spent so much time having petty squabbles amongst themselves and it was just irritating to read about. The wolves and dragons are at war, for no real good reason and that's just the way it's always been so why would they try to make peace?

Yet, despite the fact that the two sides can't stand each other and have spent years killing each other in battle, along comes a woman and suddenly they can work together? Never mind the fact that they're all aware she's put a spell on them, it's not some subtle thing that they're not aware of. They know from the get go that she's manipulating them and playing on their emotions yet somehow all they care about is how beautiful she is and how much they want to get in her pants. I find that really hard to believe considering she put them under her spell by feeding them her corrupted black blood. I just didn't buy the attraction between them, or believe that all four men would get together behind her back not to try and figure out an escape plan but to try and work out how to seduce her. I hate to say it but this is just one of those books that I'd have a really difficult time recommending and I would have zero interest in reading more about any of these characters or this world.