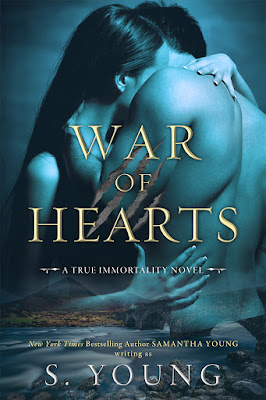 Thea Quinn has no idea what she is. All she knows is that her abilities have been a plague upon her life since she was a child. After years of suffering at the hands of a megalomaniac, Thea escaped and has been on the run ever since.

The leadership and protection of his pack are of the utmost importance to Conall MacLennan, Alpha and Chief of Clan MacLennan, the last werewolf pack in Scotland. Which is why watching his sister slowly die of a lycanthropic disease is emotional torture. When Conall is approached by a businessman who offers a cure for his sister in exchange for the use of Conall’s rare tracking ability, Conall forges an unbreakable contract with him. He has to find and retrieve the key to the cure: dangerous murderer, Thea Quinn.

Thea’s attempts to evade the ruthless werewolf are not only thwarted by the Alpha, but by outside dangers. With no choice but to rely on one another for survival, truths are revealed, intensifying a passionate connection they both fight to resist. At war with themselves and each other, Conall and Thea’s journey to Scotland forces them to face a heartrending choice between love and betrayal.

True Immortality Series:
(These stories are all stand alone and can be read in any order but they're in the same universe)
War of Hearts
Kiss of Vengeance

Review:
Conall is the alpha werewolf and chief of a pack in Scotland, his family and his pack are his priorities and it's killing him having to watch his sister waste away from a disease with no known cure. When he's approached by a businessman who offering him a cure in exchange for Conall tracking down a murderer and bringing them to justice he jumps at the chance to save Callie's life.

Thea has always known she is different she just doesn't know why, despite being born to human parents she is faster and stronger than any human should be and her healing abilities are exceptional even compared to supernaturals. After her parents died she was taken in by a family friend but once he discovered her powers she spent years locked up and suffering through experiment after experiment. Escaping cost her everything and she's been on the run ever since trying to stay one step ahead of her enemies. Now Conall is on her trail and he always finds his target, he thinks he's hunting a murderer but Thea knows capture will lead to a lifetime of pain and suffering and she will do anything to escape that fate.

I love Samantha Young's contemporary romances but paranormal is where my heart lies so when I found out she was writing her first adult PNR story I knew I had to read it. War of Hearts was a brilliant slow build romance between two characters who both have everything to lose. They're both great characters and although I was a bit irritated by how easily Conall let himself be duped in the beginning I could understand his desperation to believe anything if it meant saving his sister. Thea has suffered so much but in spite of that she has a kind of charming innocence about her and she believes the best in the people she meets. She could so easily use her abilities to get whatever she wants but she prefers to work hard and make her own way in life, something that Conall quickly comes to respect too. I thought these two made a really well matched pair and I enjoyed watching them finally start to realise how deeply their feelings ran for each other.

The story is full of action as the chase takes them all across Europe as Thea tries to keep out of Conall's reach. Then when someone else starts targeting the pair they realise that they're going to have to work together if they both want to survive. Samantha Young has created an interesting world and while this story works perfectly as a stand alone I'm really excited that she plans to write more stories set in this universe. Kiss of Vengeance is definitely at the top of my wish list for when it publishes next year!