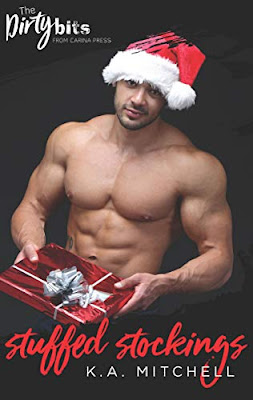 Have a holly, very jolly Christmas…

Lucas doesn’t usually do the anonymous holiday gift exchange. But when his office crush, Zane, extends an invite, how could he say no? A little holiday cheer might be nice for a change.

What he doesn’t expect are the bonus presents accompanying the bulge in his Christmas stocking—increasingly kinky gifts that have him wishing he’d torn into them in the privacy of his bedroom.

One thing is for sure: Christmas may be right around the corner, but waiting to unwrap his final sexy surprise is going to be a challenge…

This book is approximately 26,000 words

One-click with confidence. This title is part of the Carina Press Romance Promise: all the romance you’re looking for with an HEA/HFN. It’s a promise!

The Dirty Bits from Carina Press: what you want, when you want it. Over-the-top sexy microromances designed to be read in an hour or two.

Review:
Coming in at around 90 pages Stuffed Stockings is a fairly short read that is very easy to read in one sitting which is a great thing because once I stared reading about these two I couldn't put it down! Lucas is shy and socially awkward with people he doesn't know well, he's not great at reading social situations and tends to be pretty oblivious when someone is flirting with him so he hadn't picked up any signals at all from his sexy colleague Zane. Zane on the other hand is much more confident and outgoing, he knows exactly what he wants and he sets out to get it by convincing Lucas to join in the company's secret Santa gift exchange.

In the run up to the holidays the secret Santa is supposed to leave two gifts a week for their partner and they'll only reveal who has been giving them the gifts at the office Christmas party. Zane has made sure he is partnered up with Lucas and let's just say the gifts get more and more kinky as the weeks go by! Lucas spends a lot of his time fantasising about using the gifts with Zane but in spite of the increased flirting he still isn't sure whether Zane is actually the one leaving the presents.

Stuffed Stockings was the perfect combination of really sweet and incredibly spicy. Yes, you have to suspend belief a little that colleagues would take quite so many risks with gift giving in the workplace but I was enjoying the story so much that I was able to completely gloss over that aspect. I loved both Lucas and Zane and really enjoyed getting to know them. Lucas had a hidden dominant side that was just waiting for Zane to bring out while Zane appeared super confident but had a more vulnerable side once you got to know him better. They made a ridiculously adorable couple but damn their chemistry was intense. The addition of the secret Santa gifts was perfect and I was just as eager to see what was inside each parcel as Lucas was! I would LOVE another story about this couple, not because their story felt unfinished but because I was having so much fun reading about them, either way I definitely need to check out more books by K.A. Mitchell.