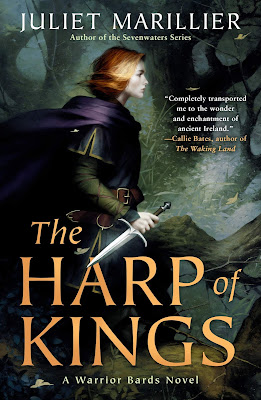 A young woman is both a bard--and a warrior--in this thrilling historical fantasy from the author of the Sevenwaters novels.

Eighteen-year-old Liobhan is a powerful singer and an expert whistle player. Her brother has a voice to melt the hardest heart, and is a rare talent on the harp. But Liobhan's burning ambition is to join the elite warrior band on Swan Island. She and her brother train there to compete for places, and find themselves joining a mission while still candidates. Their unusual blend of skills makes them ideal for this particular job, which requires going undercover as traveling minstrels. For Swan Island trains both warriors and spies.

Their mission: to find and retrieve a precious harp, an ancient symbol of kingship, which has gone missing. If the instrument is not played at the upcoming coronation, the candidate will not be accepted and the kingdom will be thrown into disarray. Faced with plotting courtiers and tight-lipped druids, an insightful storyteller, and a boorish Crown Prince, Liobhan soon realizes an Otherworld power may be meddling in the affairs of the kingdom. When ambition clashes with conscience, Liobhan must make a bold decision--and the consequences may break her heart.

Review:
I've been a fan of Juliet Marillier ever since I first started reading her Blackthorn and Grim series a few years ago so I was absolutely thrilled to find out that she was returning to this world with The Harp of Kings. Although the new Warrior Bards series can easily be read without reading the previous books the story is set in the same world but many years later and it stars Blackthorn and Grim's grown up children Liobhan and Brocc.

Liobhan is a skilled musician and singer but the one thing she wants more than anything is to become a warrior. Brocc is more interested in his music than fighting but he chose to accompany Liobhan to Swan Island, where elite warriors are trained, to keep his sister safe. Dau is another member of their class and he is in fierce competition with Liobhan to be the top student. The three are still in training when they are selected for an important mission. They'll need to take on new identities for the duration of the challenge with Liobhan and Brocc as travelling bards while Dau works as an apprentice blacksmith.

Their mission is to find a missing harp. The Harp of Kings is an ancient artefact that has been used at the coronation of all the previous kings, it has been stolen from the Druids and unless it's found in time the crown prince will not be accepted by his people as their rightful king. They need to find answers but that is made very difficult by the fact that nobody can know who they really are or that the harp is even missing in the first place. Add in the way the local fae seem to have taken an interest in both the harp and the siblings who are looking for it and things are going to get complicated fast.

I absolutely love Juliet Marillier's writing style, her books are very character driven and they read just like an old fashioned fairytale. I love the way she weaves folklore and fae creatures into her work and the blend of mystery and magic is just seamless. The story is told in alternating points of view from Liobhan, Brocc and Dau, all three were distinctive characters with very different outlooks on life. I love the strong bond between Liobhan and Brocc, they always have each other's backs and they are willing to risk a great deal to protect each other. I wasn't a fan of Dau's at first, he had some very old fashioned ideas about women wanting to be warriors and to be honest he came across as a bit of an idiot but he really grew a lot throughout the story and I enjoyed seeing him and Liobhan go from fierce enemies to grudging allies.

This story has a lot of heart and it was totally captivating from the first page to the last. I'm already desperately waiting for the sequel and I can't wait to spend more time with these characters.