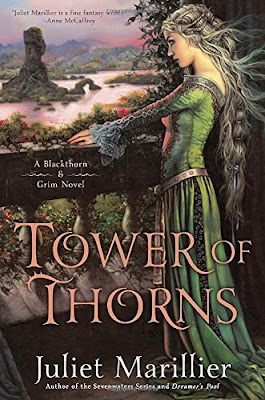 Disillusioned healer Blackthorn and her companion, Grim, have settled in Dalriada to wait out the seven years of Blackthorn’s bond to her fey mentor, hoping to avoid any dire challenges. But trouble has a way of seeking out Blackthorn and Grim.

Lady Geiléis, a noblewoman from the northern border, has asked for the prince of Dalriada’s help in expelling a howling creature from an old tower on her land—one surrounded by an impenetrable hedge of thorns. Casting a blight over the entire district, and impossible to drive out by ordinary means, it threatens both the safety and the sanity of all who live nearby. With no ready solutions to offer, the prince consults Blackthorn and Grim.

As Blackthorn and Grim begin to put the pieces of this puzzle together, it’s apparent that a powerful adversary is working behind the scenes. Their quest is about to become a life and death struggle—a conflict in which even the closest of friends can find themselves on opposite sides.

Review:
I fell in love with both Blackthorn and Grim in Dreamer's Pool but this series is honestly getting better and better with each new book. I'm not sure that I have enough words to do Tower of Thorns justice but I'm going to try because I really do want everyone to discover these wonderful books for themselves. Although this book does work well as a stand alone I do think you'll be missing out by not reading the series in order, mainly because both books are excellent but also because it's been so brilliant watching the friendship slowly build between the main characters.

Blackthorn and Grim have started to build a life for themselves in their new home, Blackthorn would deny it but even she has made a few ties within the community and I think she's enjoying practising her craft as a wise woman again. She still doesn't have much patience and doesn't have the best people skills but she is very good at figuring out what is going on and finding a solution to fix it. When Prince Oran is approached by a noblewoman who is in desperate need of assistance Blackthorn is the most likely person to be able to help her. You see Lady Geiléis's lands are being badly affected by a cursed monster that's been trapped in a tower near her home. The monster howls from dawn to dusk without letup and it's driving the people and animals in the vicinity mad. This has been going on for nearly two years now and Lady Geiléis is desperate for a way to make it stop.

Blackthorn initially isn't keen to offer her services but an old friend convinces her to investigate, promising her it will get her one step closer to taking revenge on her greatest enemy. Grim has reservations about it but he would follow Blackthorn to hell and back if it meant he could keep her safe so when Blackthorn agrees to help Grim travels with her to Lady Geiléis's home. When they arrive it quickly becomes clear that there is more going on than they originally suspected but what remains to be seen is whether they can solve the mystery in time or whether the curse will cost them more than they ever bargained for.

I'm not really going to talk much more about the plot in this review because I want to focus on the characters. We've seen a huge change in Blackthorn since the beginning but she's still a damaged young woman who is desperate to take revenge on the person who wronged her (and who can blame her after everything she's been through!). I've enjoyed seeing her character start to take a small amount of pleasure in things again though and I've loved watching her friendship with Grim develop. I'm desperately hoping for romance between these two at some point but I'm so glad Juliet Marillier is taking her time with them because they're both too damaged to find their happily ever after just yet. I was a tiny bit irritated with Blackthorn in this book because of the way she turned all of her focus onto a familiar face from her distant past. I could understand why she was so pleased to see someone who knew her before her life was destroyed but I was upset for poor Grim who was so convinced that she was going to replace him with the new guy. It was interesting to get more of a glimpse into a side of Blackthorn that we've never met before though and I did love the way things turned out in the end.

In the first book Grim was more in the background, he was there to help Blackthorn whenever she needed him but we didn't get to learn much about his past or why he had such a low opinion of himself so I was thrilled that we got to see much more of him here. I absolutely love Grim's character, he's the kind of guy who is pretty happy to fade into the background but he goes out of his way to help anyone he meets and he's far more intelligent than most people give him credit for. People seem to think that because he's big, strong and quiet he can't be clever but that is far from the truth and he's very observant in an unobtrusive way. Blackthorn relies on his instincts as much as her own and I love the way she always turns to him to talk through her ideas. It's heartbreaking to see how little Grim thinks of himself and I really want to see that change as the series continues but now we have had a chance to learn more about his background I can understand why he feels that way. I'm not going to talk about what happened to him but I will say his scenes stole the limelight in this book and left me more in love with him than ever. He is just as damaged as Blackthorn but we got to see him do a little healing here and I was so proud of him for the way he faced up to his past and started dealing with his issues. There's still a way to go but he's definitely making progress.

This series has a really familiar, fairytale type feel to it, Juliet Marillier has created a world full of magic and fae folk, there are dark curses and mysterious goings on but also strong friendships and some really light hearted and fun moments that just make you smile. From the moment I picked up Tower of Thorns until I reached the very last page I didn't want to put this book down and even then I just wanted to turn to the beginning and start reading it all over again. This series has quickly become one of my favourites and I can't wait to get my hands on a copy of Den of Wolves when it's released later this year.