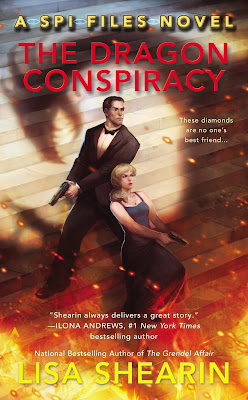 After solving The Grendel Affair, the agents have another SPI File to investigate . . .

We’re Supernatural Protection & Investigations, known as SPI. We battle the real monsters of myth and legend, but this Halloween, we’re searching for diamonds . . .

A gala opening at the Metropolitan Museum of Art has attracted the upper crust of Manhattan—and thieves. A trio of vile harpies attacks the crowd and steals the stars of the exhibition: a colorful cluster of seven cursed diamonds known as the Dragon Eggs.

In the right mage’s hands, each stone can pack a magical wallop. Together they have the power to “cure” the supernaturals of the tristate area—but for many of those vampires and werewolves, that means turning into dust.

I’m Makenna Fraser, a seer for SPI. With the help of my partner, Ian, and the other agents, I have twenty-four hours to prevent total global panic, find the diamonds, and save the supernatural community. No biggie . . .

Review:
When Mak and Ian are tasked with guarding a set of cursed diamonds known as the Dragon Eggs, at a gala night opening for the Metropolitan Museum of Art they should have known they were about to be in trouble. What they couldn't have guessed is that three harpies would show themselves in front of the humans present and escape with the dangerous jewels. Unfortunately the diamonds are dangerous and if SPI aren't able to recover them quickly enough they could be used to cure all of the supernatural creatures in the area and return them to their human selves. That might not sound like a major problem but what do you think would happen to vampires and shapeshifters who are hundreds of years old if time was able to catch up with their bodies? Yes, SPI is looking at a major supernatural disaster!

I absolutely loved the prequel novella Lucky Charms but there were a few teething problems with the first book The Grendel Affair. I like the world that Lisa Shearin has created and how she has included so many different supernatural creatures but the pacing was a little slow in the first book which made the story drag a bit. Luckily that wasn't the case in The Dragon Conspiracy and the story starts with a bang, in fact one of my favourite scenes from the book was the opening night at the museum and I thought it kept a fairly steady pace from there onwards. I really loved the addition of a gorgon to the cast of characters, Helena had a really interesting back story and considering what she has to do to stay alive I was surprised at how much I liked her character. It was also great to see Rake back in the mix again, his character intrigued me in Lucky Charms and I liked him even more here.

While I enjoyed this book more than the first one there were still a few things that bothered me, mainly the ever changing relationship between Mak and Ian. In the prequel there was some fantastic chemistry between them, I loved their banter and I had high hopes of a slow build romance between them. That chemistry fell a little flat in the first book but I was expecting it to pick up again here since Lucky Charms was written after The Grendel Affair but for some reason things seemed to a complete 180 in this book. For most of the story they were acting more like wary strangers than the friends and colleagues they'd been before, the banter was completely missing for a large chunk of the book and the chemistry has vanished too. It seemed like the author was throwing them both in different directions romantically and I found myself really disappointed by that, especially since we'd seen such a great build up between them previously. I know the romance isn't the main focus of the story and I definitely enjoyed the rest of the plot more than the previous book but there was definitely something missing here.

I do still love this world though and I'm hoping everything will come together in the next book. I'm not sure what to expect from the romance but I think I'm going to be going in with much lower expectations on that front, I do hope that we see the friendship and banter back between Mak and Ian though, even if we end up with no romance between them. This series has a lot of potential and I'm very curious to see what kind of supernatural creatures Lisa Shearin will throw at Mak next, she's been on a steep learning curve already but I expect she's in for a few more surprises.