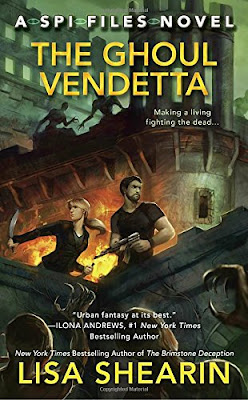 The agents of Supernatural Protection & Investigations (SPI) are paid to keep the peace. But that’s not so easy when an endless evil threatens to tear that peace to pieces...

A vampire gangster’s nephew is abducted off his yacht by a bunch of low-rent Creatures from the Black Lagoon. A slew of banks are knocked over by what looks like the cast of Night of the Living Dead. All of this may seem like the movies, but, I promise you, it’s not.

I’m Makenna Fraser, seer for SPI, and I know the culprits aren’t wearing disguises or makeup. They’re real. Deadly real. Especially their leader—an ancient shapeshifter who leaves a trail of chaos and blood in his wake. Now, he’s taken my partner, Ian—and his intentions aren’t pretty.

The worst part? This is only the beginning...

The beginning of the end of the human race.

Review:
What should have been a fun date for Seer Mac and her Goblin boyfriend Rake quickly turns sour when the yacht they're partying on is attacked by a kraken and a bunch of other weird creatures normally only seen in bad sci-fi movies. Things only get worse when ghouls start carrying out perfect bank jobs and eating any security guards who come anywhere close to catching them in the act. Throw in an old vendetta against her SPI partner Ian and shocking kidnap and Mac realises the stakes have never been higher but can she rescue Ian from the clutches of a madman AND save the world from an ancient enemy or is she destined to fail?

One of the things I love most about this series is the way Lisa Shearin keeps coming up with interesting new creatures to populate her world with. We've had dragons, gorgons, demons and more but The Ghoul Vendetta increases the stakes and introduces a whole new host of monsters for Mac to worry about. We also get to find out a lot more about Ian's background which was fascinating (I wish we'd seen some of the story from his point of view though!). Mac is much more confident than she was at the beginning of the series and while she's not the strongest fighter in the SPI she's definitely willing to stand up when it counts, especially when her partner's life is on the line.

If there is one thing I'm a little disappointed with it's the romance though. Rake has really grown on me as a character but I just don't see any real connection between him and Mac which makes it very hard to believe in them as a couple. Mac spends so much time thinking about Ian that Rake is pretty much an after thought throughout the whole book, even when he's going out of his way to help her. It's probably easy to guess that I'm totally team Ian but I can see that ship has firmly sailed and I'm sure I'll get over it eventually. I just hope the author can actually create half the chemistry between Mac and Rake that she's already done between Mac and Ian. Luckily the romance isn't the main focus of the story though and I'm happy to just roll with the unbelievable relationships because I'm enjoying the rest of the story so much.

The Ghoul Vendetta has plenty of action and some really funny moments to lighten up the dark nature of the ghoul attacks. We're getting a much view of the world now and there are some really interesting revelations that will have a knock on effect as the series continues. I'm definitely looking forward to seeing where things go from here and I'm still not-so-secretly keeping my fingers crossed that Mac and Ian will see sense and stop dating other people when they're both so obviously in love with each other LOL.

Source: Received from Ace in exchange for an honest review