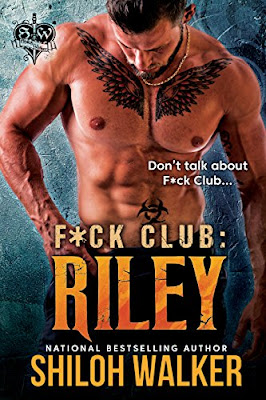 "The first rule of F*ck Club...we don’t talk about it. We just do the job and get paid."

And Riley Steele did his job very well. He’ll be the first to admit that his current life isn’t the one he’d foreseen. It’s not even one he really wants, but after his parents died and he was left to care for two siblings and a mountain of debt, he was willing to do almost anything.

Now, after almost ten years of being paid to pleasure, he’s almost numb to it…and to women.

That all changes with one phone call. Brianna Sharpe, the girl he’d loved as a boy, is leaving an abusive lover and needs someplace to hide.

Opening his home to Bree is easy. Protecting his heart is a different story. She’d completely shattered it once already. But Bree has changed and Riley wants to think there might be a chance. Only...what will she do when she discovers his secrets?

Review:
Riley started working as an escort after the death of his parents so that he could afford to raise his younger siblings. He couldn't find another job that paid enough to clear the mountains of debt he'd been left with as well as send his brother and sister to college and he loved women anyway so there was no harm in it. Now his siblings are older, his money problems are behind him and he's also part owner of a successful bar he's been winding down his extracurricular job and seeing less and less clients on the side. When his ex-girlfriend Bree needs his help to escape from an abusive ex Riley immediately offers her and her young son a safe place to stay. Bree is the one who got away, the woman who he never stopped loving and now he'll do whatever it takes to keep her safe and hopefully win her back in the process. Only one thing is standing in his way - what Bree will say if she discovers his previous occupation.

Riley was such a fab character, he's very protective of his siblings and as the oldest brother he did what he had to to make sure they were able to stay together after the death of their parents. He took the weight of the world on his shoulders but never resented them for a minute and I loved how close the three of them are now as adults. Riley isn't ashamed of his past but Bree's opinion of him matters and he worries about what she will think if she finds out about his side job. Bree has had it pretty tough since she split up with Riley but he is the only man who has always been there for her and he's the one person she can turn to when her ex crosses a line she can't forgive and hurts their son. Riley never understood why Bree left him but when we learn more about her backstory it was utterly heartbreaking and it was very easy to root for the pair of them as a couple.

The one thing that put me off this story was a scene between Riley and one of his clients, he'd already decided to give up being an escort but rather than let his client down gently he decided to keep one last appointment with her. We don't get to see any of the details but it put me off that he had sex with another woman when he was about to start something with Bree, it wasn't technically cheating but it was a little close for comfort. Especially since he returns from meeting his client and immediately ends up having sex with Bree (he has to convince her to join him in the shower so he can wash the smell of the other woman away and that was just too much of a no, no for me!).

Apart from that I really enjoyed this story though and I already love Riley's brother Con and their best friend Shame. I can't wait to read both of their books so I'll definitely be continuing this series.