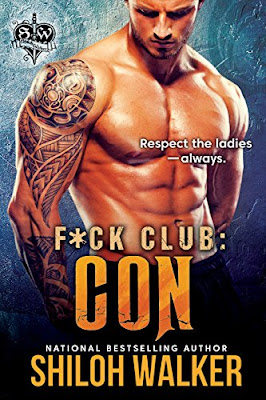 Conner Steele has nothing but respect for ladies. He absolutely adores them and takes more than a little bit of pride in his job—or rather, his former job.

After a run-in with a cop, former male escort Con, along with his brother Riley and best friend Shame, decided it might just be best to hang up their…hats and retire from the business of being paid to pleasure.

After all, they have a profitable business going with their new pub. No reason to ruin a good thing and Con is more than happy to keep pleasing the ladies—just…no longer as a job. Finding a date or company for the night has never been an issue for him, either. He’s been told more than once that he can charm a tiger out of its stripes. But lately a new hire at the bar is turning the tables on him—she is the one charming him, twisting him up into knots and getting him so worked up, he can barely see straight.

In his rather expert opinion, Shawntelle Callahan is nothing less than a queen.

And she’s a queen on a mission, too. Even as tangled up as he is over her, he can see that. First she tries to coax him out of retirement for one last engagement. When that doesn’t work, she sets out to drive him crazy. After finally admitting that she’s a writer who’s looking to do a story on male escorts, Con realizes it will be best to just stay away from Shawntelle. Sure, she says she’s just looking for some hands-on information but he knows there’s more to it than that. There are secrets in her eyes, barely hidden lies and doubt.

Review:
Now that they're out of the male escort business Con, his brother Riley, and their best friend Shame are focusing all their energy on the bar they own and run together. Con still has an eye for the ladies though and there is something about their newest bartender Shawntelle that pushes all his buttons. Shawntelle flirts with him shamelessly and there is no doubt Con would have made a move on her weeks ago if she wasn't an employee but then she starts asking awkward questions about his past and that puts him on the defensive. They can't afford anyone digging into their background, especially not someone who is so obviously keeping secrets.

Con was a really easy guy to fall in love with, he's laid back and easy going, someone you know you'd have fun with and it doesn't hurt that he's easy on the eyes and great in the bedroom. There was some serious chemistry between him and Shawntelle and I was looking forward to seeing a romance develop between them but in the end they never quite clicked for me. I think the main problem was that I found Shawntelle's behaviour totally creepy and she made it very hard for me to understand why Con would be attracted to her. If a male character acted the way she did then I'd consider him a stalker and I would be screaming at the heroine to run far, far away so I found myself doing the same to Con. I just couldn't understand why he was interested in pursuing her. She did improve later on and once we discover her secret it was easier to understand where she was coming from but by it was a case of too little too late and there wasn't enough time spent building their relationship after her revelations.

I still enjoyed the story though, Con totally saved it for me and there's no denying that the sex was hot but I just wish I had warmed to Shawntelle sooner. What I enjoyed most of all were the insights we got into Charli and Shame's upcoming romance - I'm already 100% invested in them and can't wait to get my hands on their book. Shame has a tortured past that breaks my heart but I'm looking forward to seeing Charli break through his defences and I just know their story is going to be my favourite of the series!