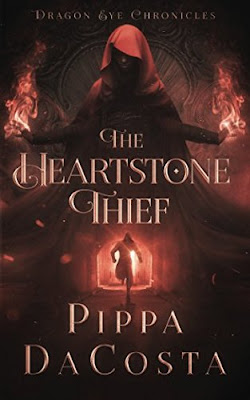 In the City of Brea, thieves and sorceresses do not mix.

When Curtis Vance—professional thief—stumbles into a sorceress’s trap, he’d prefer to kill her than help her. Now bound to the insane sorceress, his only escape (and chance to turn a profit) is to find the long forgotten Dragon Eye gem. Little does Vance know, the Dragon Eye holds more than the key to Vance’s freedom. The Eye could awaken a devastating power—a worldkiller bent on destruction, and Vance is all that stands in its way.

The ebook version of The Heartstone Thief is exclusive to the box set Legends of the Damned: A Collection of Edgy Urban Fantasy and Paranormal Romance Novels

Review:
Pippa DaCosta has done it again! A new world, a fabulously delicious anti-hero, an homicidal and slightly insane heroine and it all adds up to another book that you'll just want to get lost in!

There aren't many authors who can consistently come up with such exciting new worlds and series for their readers to play in but Pippa is one of the best. I'd kind of like to take a holiday inside her brain and go rooting around to see what else she has hiding in there! The Heartstone Thief is a fabulous story and one I'm really hoping is the start of a new series (please write more Pippa, please, please, please!). This is a world full of magic but not your nice wave-a-want-and-get-whatever-you-want magic, its a darker magic, one that demands a very high price. Be careful what you wish for because it might just come at a cost you weren't prepared to pay!

Curtis Vance is one messed up anti-hero with a dark and troubled past, he's a mercenary thief who doesn't think twice about taking from others as long as he's getting paid for his troubles. When he is approached by a mysterious sorceress he agrees to help her look for a hidden treasure but he completely ignores her warnings about the danger involved, after all there is no such thing as magic and the monsters she describes can't possibly exist. Well that was what he thought anyway, he plans to go along with her until he can steal her treasure out from under her nose but that backfires quite spectacularly when he finds himself caught up in something huge, something that could end up costing him everything.

I absolutely loved The Heartstone Thief, the characters are fantastic and full of surprises, the world is dark and twisted and its full of action and adventure. Pippa DaCosta takes us on a thrilling journey thats full of surprises and will leave you breathless. She definitely has another future hit on her hands with this one and I'm keeping everything crossed that she turns it into a series.