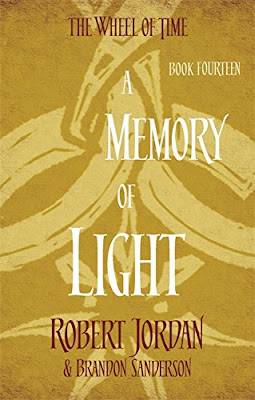 'And it came to pass in those days, as it had come before and would come again, that the Dark lay heavy on the land and weighed down the hearts of men, and the green things failed, and hope died.' - Charal Drianaan te Calamon, The Cycle of the Dragon.

In the Field of Merrilor the rulers of the nations gather to join behind Rand al'Thor, or to stop him from his plan to break the seals on the Dark One's prison - which may be a sign of his madness, or the last hope of humankind. Egwene, the Amyrlin Seat, leans toward the former.

In Andor, the Trollocs seize Caemlyn.

All humanity is in peril - and the outcome will be decided in Shayol Ghul itself. The Wheel is turning, and the Age is coming to its end. The Last Battle will determine the fate of the world . . .

Review:
I still can't quite believe that the epic Wheel of Time series is actually over! 15 books (don't forget the prologue!), 12,097 pages and over a year of reading (I read one book a month with a group of friends) and it's done. I actually put off reading A Memory of Light because I didn't want to reach the end but I'm so glad it went out on a high note. This series is absolutely huge and I was nervous about making the commitment to it last year but I have really enjoyed the journey that Robert Jordan and Brandon Sanderson have taken us on, and I can see why this is considered a classic.

I'm running out of words to use in praise of this series, just go back and read any of my other 14 reviews and it'll quickly become clear how much I've loved this world though. The characters have alternated between infuriating and amazing but the world is just so huge and detailed that it was very easy to get lost in. There have been a lot of highs and lows along the way but that is only to be expected in something so huge and the last four books have probably been my favourites in the whole series.

I'm not really going to say too much about the final instalment other than to confirm that it was a worthy addition to the series. There is just so much going on in this book, so many different plot threads that all needed to be tied together, so many characters who needed to get their final moments of glory, enemies to be destroyed and friendships to be celebrated. There were moments that I celebrated and others that broke my heart but overall I couldn't have been more happy with the ending. Is it perfect? Probably not but it came pretty close and overall this is a series I think every fantasy fan should read. I'm sad to say goodbye to these characters and if I'm honest I'm a little disappointed we didn't get an epilogue to show how our favourites are doing a few years down the line but I think we were given just enough that we can use our imagination for the rest.

I'm sad that Robert Jordan didn't get the chance to finish his epic masterpiece but I'm thankful that Brandon Sanderson was able to do such a brilliant job of the final few books and I'm glad fans weren't left with a million unanswered questions.