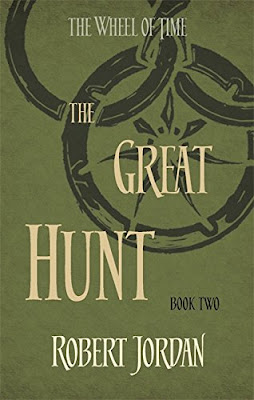 The Forsaken are loose, the Horn of Valere has been found and the Dead are rising from their dreamless sleep. The Prophecies are being fulfilled - but Rand al'Thor, the shepherd the Aes Sedai have proclaimed as the Dragon Reborn, desperately seeks to escape his destiny.

Rand cannot run for ever. With every passing day the Dark One grows in strength and strives to shatter his ancient prison, to break the Wheel, to bring an end to Time and sunder the weave of the Pattern.

And the Pattern demands the Dragon.

Review:
I'm so glad that I have finally bitten the bullet and jumped onto the Wheel of Time bandwagon, 2 books in and I'm already totally hooked so I'm excited that I've still got another 12 books to go before the journey ends! The Great Hunt started out a little slower than I expected but that gives us a chance to really spend time with the main characters and see how much they've already started to change. I'm loving watching them blossom as they start to gain more experience and grow more confident in their own abilities, some of them still have a lot to learn but they're all taking positive steps and starting to figure out their roles in the big picture.

The one item they need more than anything to help in their battle against the Dark One is the Horn of Valere, a magical horn that will recall the heroes from all ages to fight on behalf of the person who sounds it. Now that the horn has been found it is inevitable that the army of dead heroes will be called into battle, the question is which side will they be fighting for? When Darkfriends manage to steal the horn out from under Rand and the other's noses it looks like all could be lost before the real battle has even started and it all hinges on them being able to retrieve it before it's too late. Rand and the boys are really up against it in this book, they're fighting amongst themselves thanks to Rand's stubborn attempts to protect the others and they're all facing different but dangerous personal challenges but they'll have to find a way to pull together if they want to succeed.

While the boys hunt the horn the girls travel on to Tar Valon to begin their Aes Sedai training. I already loved Nynaeve but she really comes into her own here, she hates everything the Aes Sedai stand for and has an incredibly difficult time sticking to their rules but she has so much raw power that she's going to be a force to be reckoned with when she gains full control of it. Egwene is more willing to learn but has less life experience that Nynaeve so she's placed with Elayne and Min right at the bottom of the ladder but all four of these young women are awesome and I can't wait to see where the series takes them. Nothing is simple in Tar Valon and although Moiraine has never been very upfront about her plans for any of the others at least she has always done whatever she can to protect them, the same can't be said for all of the other Aes Sedai and the girls are going to have to watch their backs.

There is so much going on in this book, we get to see a few familiar faces when some of the minor characters from the first book make unexpected reappearances but we also have a lot of new people to meet, some you'll immediately love and others will make you much more wary. It's hard to know who to trust and there are definitely lots of side plots and foreshadowing going on that I think will make more sense on a reread (and I can pretty much guarantee I'll be rereading this series again in the future to test that theory!). Once again I was pulled straight into this story and I actually devoured it quite quickly compared to book 1, it starts a little slower but the pace really ramps up in the second half and I'm so invested in the characters that even when there's not a great deal happening I'm just so happy to be spending time with them all. While I wouldn't quite place this series as a favourite yet it's definitely heading in that direction and I'm sure it will be on the list well before I reach the final book.