Sold immediately at auction across the world, this phenomenal novel is the first in a trilogy packed with shooting contests, train robberies, festivals under the stars, powerful Djinni magic and an electrifying love story. This promises to be a global super lead.

"Tell me that and we'll go. Right now. Save ourselves and leave this place to burn. Tell me that's how you want your story to go and we'll write it straight across the sand."

Dustwalk is Amani's home. The desert sand is in her bones. But she wants to escape. More than a want. A need.

Then a foreigner with no name turns up to save her life, and with him the chance to run. But to where? The desert plains are full of danger. Sand and blood are swirling, and the Sultan's enemies are on the rise.

Review:
All Amani has ever wanted is to escape her small desert hometown Dustwalk and make her way to the nearest city like her mother had always dreamed of doing. Now that her uncle is looking to force her into marriage she knows she has to leave soon before it's too late. Taking all the money she has spent years secretly saving Amani enters a sharpshooting contest hoping to win enough to purchase her train ticket out of there but unfortunately it all goes horribly wrong. Now Amani finds herself on the run from an army of soldiers and Jin, a young foreigner who is wanted for treason, is the only person she can trust to help her escape. Amani has no idea why Jin is a wanted man but she knows that the only way they'll survive is if they learn to work together.

I have been desperately waiting to get my hands on this book since I first heard about it at a Faber & Faber blogger event last year, it was one of my most anticipated debuts of 2016 and oh boy did it deliver in every way. I've heard Rebel of the Sands described as Wild West meets Arabian Nights and I can't think of a more apt way to summarize it. The story is wonderfully atmospheric with a harsh but beautiful desert setting and I was pulled into the world Alwyn Hamilton has created from the very first page. I don't want to go into too much detail about the mythology because I think it's the kind of story where it's much nicer to go in knowing only minimal details but the world building is very well done and djinni aren't something you come across a great deal in YA so it was nice to read about something so different.

The characters are fantastic, Amani is wonderful, a fiercely independent young girl who also happens to be a sharpshooter and is more than able to protect herself. Due to circumstances she has to hide a lot of what she is, girls aren't allowed much freedom in her culture and it would be impossible for her to travel alone so she thinks nothing of disguising herself as a boy and setting off for an adventure. As much as I love her independent streak I also love that she isn't afraid to accept help when she needs it and she is a very loyal friend to anyone who has earned her trust. There are hints of romance and I'm definitely shipping Amani and Jin but I'm glad that the romance didn't overshadow the rest of the storyline.

This book has it all: action, adventure, mystery, a wonderful setting, great characters, magic, gunpowder and a touch of romance. The pace is perfect and once I started reading I didn't want to stop. I can't wait to see where Amani's journey takes her throughout the rest of the trilogy and will be eagerly awaiting each new release.

I also have to give a little shout out to Faber & Faber for such a fantastic marketing campaign for the book too. They really built up the hype for this one and thankfully the book wasn't a let down. My favourite part was the awesome personalised proofs they sent out & this book is already taking pride of place on my favourites shelf :o) 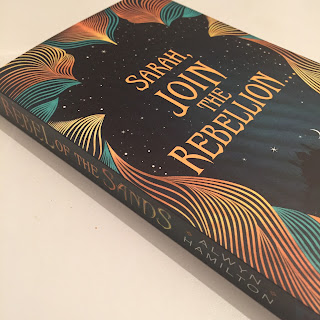