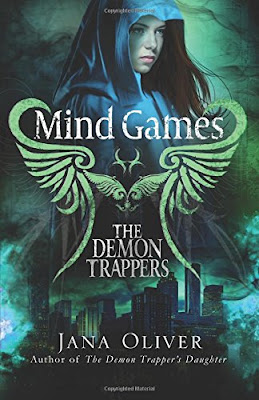 Riley Blackthorn's life as a Demon Trapper is about to hit the wall. Knowing she will always be a target for those who want to exploit her "connections" with Hell, she's learning defensive magic. It seems the only way to ensure she and her fiancé, Denver Beck, have a future together. But not everyone in Atlanta, or at the Vatican, is pleased by the news. In fact, some want to ban the use of all magic, and Riley would make the perfect scapegoat.

As a new demonic enemy stalks her, Guild politics roil the city, throwing trappers into chaos. To protect herself and the man she loves, Riley will be forced to choose: continue in her legendary father's footsteps, or carve her own path. A path that may well lead to her losing everything she so desperately seeks to protect.

Review:
I absolutely love Jana Oliver's Demon Trappers series and I was really sad when it came to an end so I'm thrilled that the author decided to revisit it and give us a chance to see how the characters are getting along. Mind Games picks up not long after the Grave Matters novella, Beck is still living in Scotland while he finishes his training to become a Grand Master while Riley is back in Atlanta. It's hard being so far away from the man she loves but Riley has plenty to keep her busy: she's helping train new apprentices, she's put in her application to become a Master Trapper and as if that wasn't enough she is also studying magic with both the witches and the necromancers so that she'll be able to protect herself properly.

Riley has always struggled to get the respect she deserves from some of the Guild members, there are those who just don't want a female trapper around and others who don't trust her because of her father's actions even though he was a legend in his own right before his mistakes became public knowledge. Anyway, the fact that she is now studying magic has given the people who are against her even more ammunition to throw at her but Riley isn't one to back down easily and she knows that she's following the correct path. As Riley faces off against the outspoken few who fear her the entire Atlanta chapter of the Guild are facing even bigger problems and it's going to take all of Riley's skill to try and talk them out of it.

Mind Games is a great addition to the series, I love seeing how confident Riley has become and it was great seeing her start to pass on her knowledge to a whole new generation of Trappers. I'm so sick of seeing people look down on her though and it really made me mad that she doesn't get the respect she has earned from all of the Guild. Luckily her enemies are few and she has far more allies these days, ones who will have her back no matter what. It was interesting getting the chance to catch up with Simon, after everything that happened with him in the earlier books there was a point where I felt I'd never be able to forgive him for his actions but he's really come a long way and totally redeemed himself. Of course the best part was Beck, he's always been one of my favourite YA heroes and nothing has changed there! When Riley is in trouble Beck is the first person to stand at her side and when he finds out what is going on in Atlanta he jumps straight on the next plane home. I will never get bored of reading about him and Riley and I just love seeing them so happy together. There are some really sweet moments between them in this book and I hope we haven't seen the last of them.